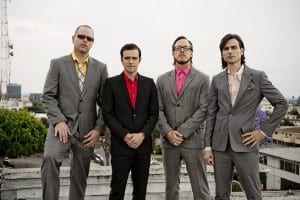 On Raditude, Weezer’s seventh studio album, out tomorrow, frontman and geek icon/heartthrob Rivers Cuomo (who, on a side note, is perhaps the only lyricist who can work the phrase “ape a goombah” into a pop song and have it sound totally seamless) treads a fine line. He’s the outsider underdog who’s suddenly been invited to sit at the cool kids’ table. One minute, he’s rapping with Lil’ Wayne; on the next song, he laments, “My hairdo isn’t cool.”

Per usual, Raditude’s strong points come when Weezer sticks to the winning formula that dates back to their debut album 15 (!)  years ago â€” anthemic, catchy choruses and simple surf-rock song structure (see: “Put Me Back Together,” “Let It All Hang Out”). The record starts and ends on strong points, with bouncy leadoff track and first single, “(If You’re Wondering if I Want You To) I Want You To” and heartfelt album closer “I Don’t Want to Let You Go.” On the eight tracks in between, it’s clear that Weezer is trying to broaden its musical horizons, with mixed results.

On the positive side of the spectrum is the Cuomo-Jermaine Dupri-Lil’ Wayne collaboration “Can’t Stop Partying,” whose lyrics take on an ironic twist with nerd-rock pioneer Cuomo singing lines like, “Monday to Sunday I hit all the clubs / And everybody knows me when I pull up / I’ve got the real big posse with me, yeah I’m deep.” The song, which first appeared as a melancholy acoustic track on Cuomo’s solo demo record that was released a year ago, has been transformed into a synth-heavy earworm, with Dupri’s fingerprints all over it.

Less successful is the sitar-infused “Love is the Answer,” which sounds like it would fit in better over the PA of my Vietnamese-owned laundromat than on a Weezer record.

Even at 39, Cuomo isn’t afraid to let his inner awkward teenager emerge. He falls for a formerly dowdy classmate on the frankly-titled “The Girl Got Hot,” while hard-hitting “I’m Your Daddy” finds him trying to woo a girl on the dance floor. Apparently, even after hanging out with the cool kids, he’s still a nerd at heart.