Since the inception of the App Store, customers and skeptics alike have debated whether or not the iPhone could handle serious gaming productions.

There is now confirmation that the iPhone is a legitimate, all thanks to Tarver Games’ new production, Ghosts Attack. This game, which should be released in the coming week, is probably one the deepest and most interesting releases I’ve seen.  From the interface, to the gameplay, to most everything in between, Ghosts Attack is one upcoming iPhone App that I am quite excited for.

To give a short overview of the plot, Ghosts Attack puts you in the middle of a rescue mission to help 13 scientists get rescued after an experiment goes terribly wrong.  Apparently the scientists were trying to invent a teleportation machine in the 1960’s.  Instead, and I think we’ve all ran into this issue from time to time, the scientists accidentally opened a portal to a alternate dimension where they were transported, never to be found.  Now, 40 years later, it is your task to help find these scientists in this dangerous, ghost-filled world. 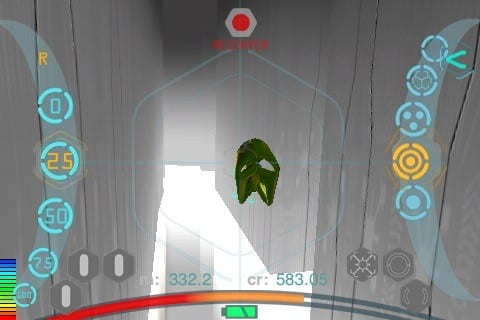 In the beginning of the game, you are a new recruit in the world of Ghost hunting.  Most of the game’s opening missions are just a tutorial, but they are quite entertaining given what most iPhone games put you through.  You are led by Karl, your mustachioed guide and Torgan Science Rover Technician, who shows you the ropes on how to use your new vehicle.  Using fairly straight-forward missions, awesomely-poor voice acting and some uber-nerdy wit, the tutorial is over before you know it and the game begins.

The controlling scheme is quite intuitive and easy to use.  On the left side of your screen, there is a bar that allows you to change the speed that your Rover will travel with a slight slide of your thumb.  On the right, there is the button to shoot, which helps the destruction of enemy ghosts.  To steer, players must tilt the iPhone in the respective directions.  Getting used to the controlling scheme is going to take some time to master, but experienced gamers should be able to catch on quickly.

One good thing about the game is that the Rover is upgradable, specifically in the firepower and handling of the vehicle.  This adds some customization to an already deep production from Tarver.  Buying these upgrades are a fun way to spend the “credits” that you accumulate during the game.  Credits are earned by distance traveled, items recovered and ghosts killed, letting players have fun not only by spending money, but by making it as well.

Ghosts Attack uses the different functions of the iPhone in ways not even imagined by many other developers to enhance the gameplay.  For instance, with the use of the Google Maps interface, players can take their Rover to any place in the world to combat the Ghosts and recover important objects.  Selecting a region by use of Google Maps will let the game invent new levels for you to roam about, making the potential replay value virtually unlimited.  Ghosts Attack also implements less-common-but-not-previously-unused features such as Facebook Functionality, which will allow you to invite friends to play the game with you, coordinate rendezvous points or leave a package for fellow Ghosts Attack patrons.  Tarver Games’ upcoming title will also incorporate episodic content, which will allow players to download more missions, add-ons and Rover upgrades as the year progresses.  This will be a form of in-game transaction, costing each player about $0.99 per episode. 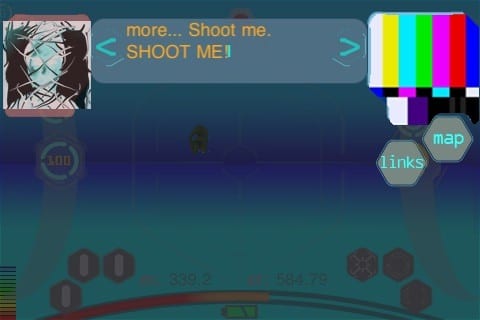 Ghosts Attack also has a very intriguing storyline.  Though I haven’t played all of the levels, many of which will be released at a later date, the plot develops pretty well for a mobile game.  Karl offers plenty of comic relief while the ghost characters are quite scary.  Let’s put it this way: I laughed, I cried and I cant wait to see what additional twists and turns will be made available as we move through the comings months.

My favorite part of Ghosts Attack was how impressively deep the game was.  Not only was the story good, the graphics tolerable and the gameplay entertaining, but the sheer number of levels was unexpected.  I think that Tarver Games really has something going here.  They have really pushed the bar to which gaming on the iPhone was thought possible.  Though it is a completely different style of game, I almost got a Half-Life vibe from Ghosts Attack.  It’s just that interestinh. 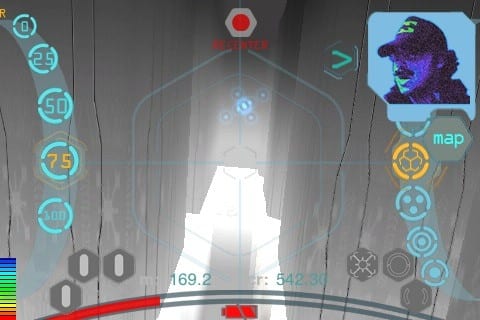 However, this brings me to one of the few negative aspects of Ghosts Attack.  First, I must add a disclaimer that this has nothing to do with the gameplay or in-game controlling schemes (things of which have been know to be very picky about).  No, instead this is more a broad, couldn’t-help-it criticism that should be taken very lightly.  I just wish that Tarver Games could have expanded on this title a little more.  It is already great, don’t get me wrong, but I would’ve liked to see this title go another step forward in development.  I know that Tarver doesn’t have unlimited resources or capital, so it is very hard to put any blame on them for this.  Let’s just hope that this game is a success, so Tarver is swiming in revenue and can kick even more ass with the sequel.  Also (and I’m nitpicking here), some of the loading times for the game were a bit slow.  Hopefully that will be taken care of to a certain exent by the time the public release is live.

Blast Factor: The significant thing about Ghosts Attack is not that it’s the best game that’s ever been made for the iPhone; that’s just not the case.  This title has shown the potential that iPhone has as a gaming platform.  Furthermore, the fact that Ghosts Attack came from a smaller developer like Tarver Games is just icing on the cake.  I cannot wait to see what Tarver brings in the future and, if we’re lucky, what a major developer can do if they sink enough resources into a project for the iPhone.  Ghosts Attack can be picked up for $4.99 at the iTunes App Store, which is a very fair price.  If you’ve got the iCash, I say give this App a shot and let your visions for the future of the iPhone as a gaming platform unfold.

Ghosts Attack will be available exclusively at the App Store for $4.99. A copy of this game was given to us by the publisher for reviewing purposes.