I thought that when Need for Speed Shift came out, I had seen the best racing effort of the year. Realistic with minimal arcade style driving incorporated, and highly pleasing visually, I was wowed. But less than two weeks later, and Need for Speed has already been thoroughly outclassed. Forza Motorsport 3, the latest entry in the series, digs deep and provides gamers with enough content to keep them busy for days. Even as I write this review, I’m still only 37% through the game and have sunk around 3 days into the game. So now, give me the honor of presenting you with Forza Motorsport 3.

This game is one of the best racing games I’ve played. When I opened the box, I was surprised to see not just one disc of content, but a second disc full of extra cars, racing tracks and other tidbits to expand on the already immense experience. I booted up the first disc and immediately ran a race and was surprised by how the controls were more fluid than the controls for Need for Speed: Shift and Gran Turismo. The race wasn’t too bad and as soon as it was over, I sat back and thought about how the game looked.

Need for Speed: Shift had gone all out for realism, right down to first person driving and actual effects for crashes (blurred vision in black and white, a nice touch). Forza’s realistic nature stems from the controls and the graphics. When you play in first person, it looks sharper than the graphics for NFS: Shift. All around, everything was sleeker in this game. When you go through your cars, the menu highlights them in a glamorous fashion which accentuates the beauty of the car’s design and makes you want to own it. Numerous models are included in the game, from brands ranging from Ford to Bugatti (racing in the Ferrari was always a treat).  When you race, the graphics of the layout are amazing. In first person, you feel like you’re actually driving the car in real life. In third person, you enjoy the view as you race against beautiful cars on tracks which range from stunning to borderline perfect.

The Cars are the lifeblood of this game. The sheer number available from the onset is amazing. There are a few which have to be unlocked, but the cars which are already available are pretty good. So you won’t have to worry about driving crappy cars since you can choose a good one if you’re inclined. As you win races you’ll receive credits to customize, upgrade and unlock other cars which furthers the game play and gives you goals.  Once you’ve got a garage full of your favorite cars, just tear up the expansion tracks on the second disc to fulfill your every racing desire.

The difficulty of the game is like most games, easy at first with a proportional rise in difficulty as you go on. You can also control your handicaps by going into options and choosing what controls you want to be automatic and which controls you want to be manual. For a real driver’s challenge, go with change gears manually for an added dose of a realistic driving experience. Once races start getting difficult, the amount of skill needed to win increases as well. The handicaps allow beginner players to get in the game, and there are also features like rewind which allow players rewind the race if they mess up. It’s an interesting feature, which docks you some points in performance, but allows beginners not to get too aggravated if they mess up. 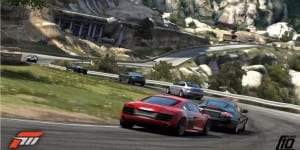 Graphics are also pretty impressive. I’ve mentioned tracks and the load of the cars, but when you play the game, the amount detail put into it is clear. When I hit barriers, it sounded and looked like I was hitting barriers. Every crash takes its toll on the car. I would cry whenever I scratched my car since I could see the damage done to the sides and the paint scratched off. It’s an impressive feat which makes NFS: Shift and Gran Turismo’s crash effects look childish. That’s no easy feat.

The whole game is damn near perfection. But I still have a few issues with it. It’s got a load of content and stunning visuals, but the game doesn’t push the line. It doesn’t really delve into groundbreaking territory. The rewinding features and the handicaps are creative but they’re not pushing the envelope, something I wanted this game to do very well. You can get too dependent on the handicaps, which is ok but doesn’t allow you to experience the full potential of the game. The sheer amount of content can be a little overwhelming and you can feel like there’s too much to do, but this is definitely a game that offers so much game play in return for the amount you pay for it.

Blast Factor: This is everything a racing game should be. Realistic, practical, sleek and well designed. Overall the gameplay is magnificent and will attract gamers who are casual fans and please those who are hardcore racing fanatics. Beginners have helpful automatic driving and rewind to help them through the beginning stages until they’re ready to fly solo. Players have a highly customizable experience and also have an absurd amount of cars at their disposal. This game is everything Need for Speed Shift aspired to be and definitely buries the other entries in the Forza series. If you’re looking for a great holiday game for racing fans, this is definitely the game you’ll want to get.