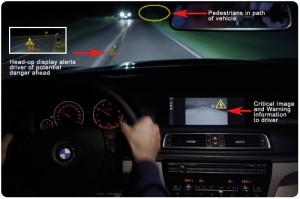 Chances are you don’t drive a BMW, so while you may know they’re a pinnacle of German engineering, they’re sleek, and, oh yeah â€” fast â€” they also have some pretty cool gadgetry buzzing around inside there too. From adaptive cruise control that will slow you down when someone stops ahead of you to that driving test savior automatic parallel parking mechanism, there’s enough to make your little Civic tuck its tail between its legs. In fact, luxury cars have a lot of impressive technology tucked beneath their hoods.

Take the night vision-technology that comes, optionally, built into these vehicles. In its first incarnation, night vision cameras could see the road ahead of you by amplifying the ambient light and displaying the resulting picture on a dashboard LCD. Later developments added infrared sensing, which blasts the road directly in front of you with IR light to see when ambient conditions are dark, to far-IR temperature detecting.

The system detects changes in temperature to help you distinguish between a parked car, a deer, or a human. Better yet, the imaging software from Autoliv can recognize the heat patters, and display a "pedestrian" warning as well as tinting the person standing in front of you in yellow to make them stand out on the black and white display.

Of course, the biggest downfall to these systems is that you have to pull your eyes off the road to use them. Its one thing to glance down at your speedometer, but it’s a whole another thing to try and process images from a screen and maintain safe control of your vehicle. In the future, the company might integrate the warnings onto a heads-up-display across the windshield, which is equal parts futuristic and cool.

Several years ago, cruise control was a fancy gadget relegated only to the most expensive luxury vehicles. Now, you’ll find it on just about every car. Luxury offerings have a way of trickling down to the average consumer, and mabye one day, you’ll climb into a night-vision equipped Civic.