I’ve never been a fan of karaoke, but after watching Joseph Gordon-Levitt man up and do it in (500) Days of Summer, I figured I’d give it a shot. Lips: Number One Hits seemed like a good place to start. Now, I’m not a big fan of karaoke, but I really, really like this game. That’s right. This isn’t a simple karaoke game (don’t worry!), it’s karaoke with a bunch of peripherals. For those of you who think this game is a sequel, you should know upfront: Lips: Number One Hits is more of an expansion pack than a full blown sequel. That said, the game polishes up certain aspects of the last game (the menu for starters…) will preserving the tone of the original.

How do you address gameplay in a karaoke game? You use your wireless microphone to sing songs! Lyrics appear on the screen and you need to sing. Simple? Yep. Bars appear under the lyrics and as you sing, you fill up the bars. The points you earn allow you to grow and as you go through the game. You start out as a Shower Dreamer, the starting level. As you earn awards, you can increase your level until you peak at Superstar. In addition to matching the vocals and keeping up with the lyrics, you can earn bonus points based on how you move your microphone, so be sure to watch what your avatar is doing! You can customize your avatar to look the way you want it to look, so be sure to customize it to bring out the inner Rock Star or Pop Diva in you. Not only do you have a dancing avatar, but you also have a few options about what’s playing in the background. 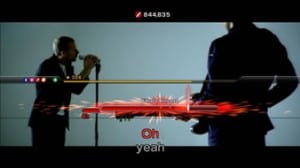 Now, the most important part of any karaoke game is song selection. I’m not big on main stream radio, but the game developers did a good job of balancing out the song list so that there’s a little of everything available for everyone. Karaoke classics such as The Cardigan’s “Lovefool” and Tears For Fears’ “Everybody Wants to Rule The World” are joined with new hits like Coldplay’s “Viva La Vida” and The Plain White T’s annoyingly catchy “Hey, There Delilah.” The game also includes a redemption code for a genre pack. If you want rap, love songs or rock, you’ll have a chance to download them to expand your experience. You can check out the full list here.

Now, let’s be honest here. Karaoke is can only really be fun when you’re with a group of friends (and maybe drunk). My experience will probably be very different from yours depending on who you play the game with. If your friends love letting loose and going crazy once in a while, then this is a game you will probably enjoy since it’s cheaper/easier to play from the comfort of your home with a group of close friends than it is going to a bar and singing in front of strangers.

If you’re expecting a revolutionary karaoke experience, then be forewarned. The game is fun, but there are a few weak points. The loading times can get on your nerves. To shave off a few seconds, load the game to your hard drive so the songs and menus load a bit faster. Not too fast, but bearable. When you’re in the menu section (which is now like iTunes’ album Grid layout), you see more than the 40+ songs which come with the game, which can be a little confusing. Some of the songs, which were released in Lips, can’t be played without swapping the disc (so you need to own Lips as well). These are minor drawbacks which don’t make it any less fun, just a little annoying.

Blast Factor: So here’s my summary. If you like Karaoke and Pop music, you will love this game. It’s not very challenging, and while it attempts to build up a solid single player, the game really shines when playing with friends on multi-player. It’s a solid expansion pack and has an edge on the original. If you want more songs, all you need to do is purchase them from Xbox LIVE. All in all it’s a solid investment, considering the fact that the bundle comes with a microphone and a 45 solid starter songs. Expansion improves the experience, and each person’s experience varies on conditions, so the only way to find out is to get it and bring a bunch of your friends together and sing your hearts out. BYOB.

Lips: Number One Hits is available exclusively on the Xbox 360 for $59.99. A copy of this game was given to us by the publisher for reviewing purposes.