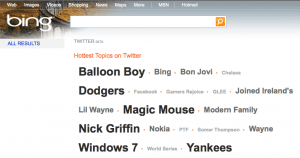 Though dismissed at its origins, Twitter has become one of the most important ways to keep your finger on the pulse of the Internet. This was probably most apparent when Michael Jackson passed away earlier this year, singlehandedly bringing down AIM, slowing social networking sites to a crawl, and convincing Google that the hoards of people suddenly searching for “Michael Jackson” were apparently a DDoS attack.

Google saw the millions of people searching for the pop-artists name and assumed they had to of come from an automated source, either requiring them to perform a CAPATCHA or denying their request altogether. Realized they were missing a key market opportunity”"second to not inventing Twitter in the first place, of course”"Google and Bing have both reached agreements with Twitter and Facebook to start indexing peoples’ tweets and public status updates, respectively.

Bing’s Twitter search page is live now, as is Google’s Twitter incorporation. We tried a few searches that are trending right now (Ed: Are we really still talking about balloon boy?), and sure enough, both search engines displayed a few results. Bing also has a tag cloud with trending topics organized by how hot they are. 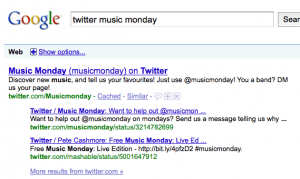 It will be interesting to see how well the two companies are and handling the intense amount of link and hashtag spam occurring and to see how successful they’ll be at keeping it from befuddling search results. Of course, now that Twitter has included adding spam links and non-relevant hanstags as violations to their terms of service, it looks like everyone is trying to keep a handle on the problem.

The most extensive Twitter search, set at search.twitter.com, only indexes two weeks worth of tweets, so it’ll be interesting to see how long Google keeps tweets in their indexes. Right now, there is no easy way to find a specific tweet that you sent in the past. That being said, it also doesn’t appear that the purpose of indexing these tweets is for long-term storage”"Google and Bing are probably only looking for a way to figure out what’s hot now.

Critics have also been dismissive of Twitter for a long time, pointing out that without ads, the company has no monetization strategy, and will never turn a profit. While making a profit is secondary when you have millions in venture funding coming in already, but licensing its API to Microsoft and Google is a great way to make money, and Twitter may have finally stumbled upon their key to monetary success.