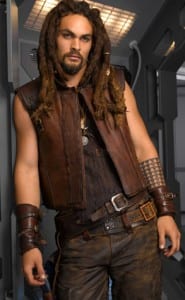 “Stargate Atlantis” co-star Jason Momoa has landed a role in the pilot for a possible HBO fantasy drama called “Game of Thrones,” according to GateWorld.

GateWorld reported that Momoa told fans at the Armageddon Expo in Australia that he got the role, and the Chicago Tribune later confirmed it.

The HBO series is based on the “A Song of Ice and Fire” novels by George R. R. Martin. The book is a planned seven-part series, with four of the books published so far.

In the pilot, Momoa will play Khal Drogo, a wealthy and powerful warrior and horse lord.

GateWorld also says that Momoa will have a nude sex scene in the show, which female fans will be sure to appreciate.

The series is expected to premiere sometime in the next two years.