The game continues to grow, with the addition of legendary coaches, real-life, current players and legends of the game, but there’s one thing I’ve been looking forward to testing out that is finally working: the fantasy points and leveling system for your players and your team.We’ll get to that important point momentarily.

If you missed our initial hands-on, you can read it here; just know that a lot has changed since I wrote that, as the camera has zoomed back a bit for a better view of the field and the action, the game runs smoother (the framerate was locked in for most of my time playing, whereas it skipped around often in the alpha), and the pacing feels a bit better, as the clock has been tweaked and fixed so that it doesn’t run at random anymore. These are normal things to clean up as a game approaches launch, but it’s nice that you can feel the game getting closer and closer to completion, improving along the way.

The legendary coaches are for single-player matches; you can earn points in these bouts (and a future update will ensure that you keep the points even if you quit early, since it’s just the computer and not a fellow person). It’s a good way to help yourself along to the next level, as well as a place to check out some different plays so you can what they do–and what your team is capable of doing effectively. Legendary players come into play a bit more often, as you get two on your created team when you start it. These players will be more experienced than your other, made-up players, and are selected based on the style of play you choose; for example, if you want to be pass heavy, you’ll probably end up with a legendary quarterback or wide receiver, and if you want to run, you will probably get a running back. 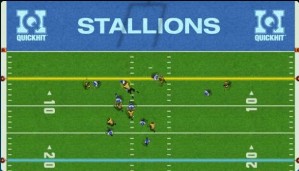 The game feels more and more like a coaching simulation as time goes on, and since it’s more accessible than EA’s foray into that field with their Head Coach series, it also feels like it will stick. You don’t need to be a football genius in order to succeed at Quick Hit–if anything, the game might teach you a bit about play-calling and the like, which can only make you better at it, but it isn’t required.

The fantasy points are the thing I want to focus on, as stated. You earn points for successfully completing plays–such as passes, runs, touchdowns, field goals, etc.–but also for little things. Your linemen can earn points for successfully blocking the opposition or running through them if they are on defense. You pick up points for sacks, picks, extra points, even successful punts. Every action builds towards you earning points and leveling up, and once you have leveled up, the game switches to its more RPG/MMO aspects. You earn coaching points for every level you gain–these coaching points are then distributed among your players as you see fit. You can organize them by worst players, best players, position–you have a lot of options for filtering, and it’s all easy to use. Every few levels, your players unlock new skills which are automatically used in games. Say you have a lineman with a skill that helps the linemen around him block a bit better–that’s valuable, especially when you need to use coaching points on other parts of your roster in order to stay balanced. 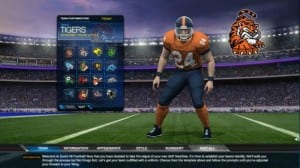 It’s a system that I can see getting addicting–people complain about having to level grind in MMOs or more traditional RPGs, but there’s one important point here that you need to remember: level grinding is playing football. I can’t stress that fact enough. If you want your team to be better, you play a game. You don’t have to do anything special, just play, and you will earn points. You don’t have to win–as long as you play, you’ll earn points for what you have done right. Facing harder teams is actually good for you too, as there is an experience multiplier for tougher opponents. You don’t even have to focus on a particular player, like you would if you were playing the franchise mode of Madden. If your running back is awesome, abuse your running game, rack up fantasy points, and use your coaching points on other positions. That kind of freedom isnt’ found in any other football title I can think of, and is a huge positive for the system in place in Quick Hit Football.

Brandon Justice, the Director of Design for Quick Hit Football, let me know that they are working on an update to make rage-quitting a non-issue, for those of you who are wondering if you are going to be screwed out of earning points by other people. The plan is to setup the game so that whoever quits loses their points, but you, the non-quitter, get to continue to play against the computer in order to pick up a victory for your record (assuming you can continue to win) as well as continue to earn fantasy points. There has even been talk of making it so that those who quit, once the computer has taken over, will still earn the loss if the AI is unable to beat their human opponent. Since rage-quitting and whiny opponents are the main reason I get away from online football (and online sports games in general) after a time, this is news I can welcome with open arms.

Quick Hit is looking better each time I play it, which is good news considering the team is still hard at work improving the experience and listening to their fans for feedback. If you haven’t checked it out yet, I suggest you get going and join the open beta, especially since you can start to earn fantasy points now for your team.