One thing that never gets old is killing zombies. Sure, you can get tired of shooting them, or tired of beating them down with a bat or what have you, but the act itself of tearing through a crowd of zombies is one that just does not lose its luster over time. That’s part of what made the original Dead Rising so appealing–you had a lot of freedom to take care of zombies however you wanted to, which kept the game appealing throughout, and for multiple play sessions.

Okay, so maybe Frank West and his freakish fivehead are not part of Dead Rising 2, but Blue Castle Games and Capcom are doing their best to make us forget that. Chuck Greene, a former national motocross champion, is stuck in Fortune City, which is basically Las Vegas with zombies. This means a brand new environment, brand new weapons, and, thanks to advances in technology, loads and loads of zombies. Part of what made the original Dead Rising impressive was the number of shambling, muttering undead on screen at once; this time around, Blue Castle has cranked the knob up to 11 and is telling people that 10,000 zombies can be on screen, at the same time. The zombies are also a lot more animated than they were in the original Dead Rising, so this massive number is even more impressive. Exponentially more zombies with additional animations and more life-like movements? Yes please. Let’s not forget to mention that the camera has been improved so that you don’t lose Chuck as easily as you may have lost Frank in a crowd–zombies now appear see-through when the camera pans in close enough, so you can see what you have to do and where you need to go as you fight with the brain-craving masses.

What stuck out to me about my time with the single-player mode in Dead Rising 2 were the weapons. You had some old favorites–the katana, chairs, trash barrels–but there were plenty of new weapons that demanded attention too. The katana has been overhauled a bit, with improved physics–whereas in the original, if you sliced away, the animations just had zombies fall away from you sliced open with a katana, you now see the exact spot where the zombie was hit slice open and fall away. I just managed to scrape against a zombie’s head with a glancing blow at one point, and part of his scalp came flying off before the blade separated his shoulder from his body. 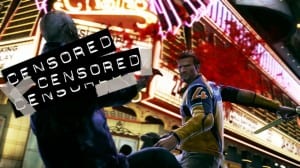 As for the new weapons, I tried out a few things like the roulette wheel, which acted much like any other large, blunt object from the first. Smash first, ask questions later. More interesting was the chainsaw paddle. This was two chainsaws, duct taped to a pole. You started both chainsaws up and went after the undead like you were Darth Maul and they were mindless, bleeding Jedi. The duct tape is something important to note; it quietly confirmed that you can create brand new weapons by combining other weapons, which, even if there was not a single new item in the game to start, would give this sequel a better weapon selection than the original.

This particular portion of the demo was a mission–I was supposed to kill 300 zombies in 10 minutes in order to unlock a bonus round, which the Capcom reps told me I did not want to miss out on. Heeding their advice, I surpassed that total before time was up, which allowed me to partake in the bonus round. The bonus round gave me a wheelchair. With assault rifles duct taped to it. Did I mention it was a wheelchair that drives itself? Because it was a wheelchair that drives itself with assault rifles attached to it. 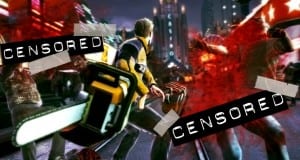 You can guess how much fun that was to use–one of the Capcom reps even pointed out that you could see how happy the wheelchair made me as I used it (my poker face was nonexistent, apparently). Like I said, wiping out crowds of zombies never gets old, especially when you do things like equip a motorized wheelchair with high-powered weaponry and tell me to go crazy.

I’m very impressed by the progress of Dead Rising 2’s single-player mode, as this feels like it could be a very different game from the first while still retaining the over-the-top zombie thrashing that drew so many people to the series in the first place. Multiplayer was also a good time, which took me by surprise.

Four games (the only four that have been announced, and Capcom was silent on details of future info on the subject) were available for multiplayer–Ramsterball, Headache, Pounds of Flesh and Slicecycles. Ramsterball may have been my favorite–you were placed inside of a rolling ball and told to run over as many zombies as you could, along with three other players. The twist was that just one player–the one whose ball was lit up–could score points with their kills, and the other players had to smash into them at a certain speed or higher in order to take that advantage away. The player with the points could bank their points by going to one of a few pedestals littered around the playing field, but it appeared as if your points multiplied the longer you held them and killed more zombies, adding a layer of strategy to the game. 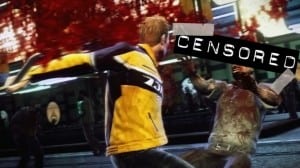 Headache was entertaining as well–you slammed colored blenders onto zombie’s heads, with the intention of starting them up and making zombie juice with the press of a button. You also had a stick of dynamite, which you could plant in a zombie near an opponent’s blenders; blow that up when you press the button to nullify their progress and enhance your own.

Pound of Flesh was the only one of the four that left me without a big smile. You have antlers on your helmet, and you charge at a row of zombies by holding X, then press X quickly to flick those zombies onto a scale. There are fat zombies and skinny zombies, so with some practice and finesse you can put the heftier drones on the scale and improve your chances. This was the only one of the four mini-games that didn’t have you interacting with the other players, which may be why I didn’t like it as much.

Slicecycles was my second favorite of these games–you drive around a motorcycle that has two blades attached to it on the sides. Whoever was leading from the previous three games got a few seconds to themselves to start the match as well, which is nice incentive. Drive through the zombie horde, slicing up as many of them as you can by accelerating with the RT and using the LT as a brake–if you tapped the LT correctly, it worked as a handbrake, which allowed you to skate through the crowds at an angle and let the bike turn itself around, saving you valuable seconds and giving you more chances to wipe out zombies. This game also came with a bonus round, where certain zombies had pink balloons on their heads–they were worth bonus points, so you want to nail them.

As our scores were tallied up, a dollar amount also showed up. There wasn’t any word on what that money was for, but it’s obvious it’s going to be used for something–otherwise the game would just use points as a guide for success.

Both the single and multiplayer experiences are shaping up to be good fun, which is good news for those of you waiting for your next go-round of zombie mashing mayhem in an out-of-control controlled environment. We’ll have more info on this game as it nears release, but for now, enjoy the screens–apologies for the lack of zombie slaying gun chair pics.