It’s amazing how strong the rumor mill is the age of Twitter. Despite making no official press announcement, everyone and their mother is apparently aware that Google is going to launch a music service in the near future which will allow users to stream a huge catalog of songs right from within the Google search window. So while we’re reporting on rumors we haven’t personally verified, you don’t really have any reason not to believe us.

Google is partnering with iLike and Lala for a new music service. Both of these sites allow users to stream samples of any song in their catalogs, while Lala allows users to stream whole songs once, on-demand before requiring a small fee. The sites also allow users to embed the stream in a site. Because both sites have signed deals will all four major record labels, the vast majority of music will be available.

Google has long had a music search built into results, despite never having advertised it much, useable with a simple “music:” operator. Results included a listing of songs and albums that matched the query, with links to music sellers to purchase the songs. While this is strictly conjecture, we’re predicting that Google will start incorporating song streams directly into the search results. 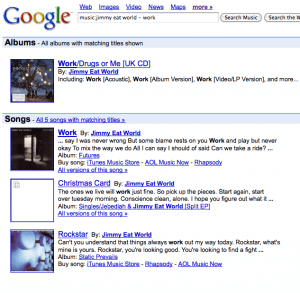 While the music labels are usually seemingly adverse to any incorporation of new technology, they’ll likely be happy with all the extra eyes being directed to sites where users might purchase music legally. The offical announcement is scheduled for October 28, so we’ll let you know if anything changes.