Officially called “The Stage-Gig,” the sound system packs in 40 watts of power,‚  has a 6.5″ woofer, and a specially-engineered horn-loaded silk tweeter, which altogether comprises, what Altec says is‚  “a solid and well balanced stereo sound.”

I’m an avid music-gamer, and can adamantly proclaim that when playing games of this nature with increased sonorous fidelity, the experience becomes so much more enjoyable. You just miss too much with your TV’s built-in speakers.

The Stage-Gig will retail for $99.95 on Amazon, Costco, and other electronic outlets when it releases in November. 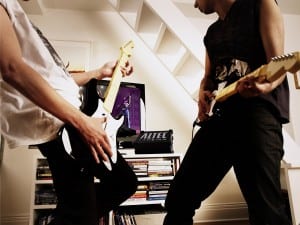