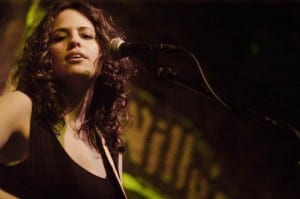 NEW YORK — Lisa Bianco describes herself as a “pop singer/songwriter with a punk heart.” Bianco, who was raised in Long Island and currently lives in Queens, said the diverse New York music scene she grew up with had a huge impact on her songwriting.

Hometown: New York
Genre: Indie rock/alternative
Influences: Pearl Jam, U2, Blondie, Radiohead, Patti Smith
Craziest Musical Experience: Traveling from New York to Geneva to Venice to see Pearl Jam perform at a festival, only to learn that it had been canceled due to a tornado. “We just got drunk on wine and went out to dinner” she recalled. “It was really bizarre.”

“You see a lot of extremes of everything” she noted. “You can always grab something fun from any kind of band or performer, no matter what it is. “¦ I think I kind of incorporate all that stuff.”

Indeed, Bianco’s songs seamlessly fuse aspects of influences that run the gamut from Fugazi to The Bangles.

This will be the second CMJ Week appearance for Bianco, who regularly tours around the tri-state area, alternating between full-band and acoustic solo performances.

“I really learned a lot from the whole thing last year” she said. “You meet people at other gigs and talk about music and the state of the industry. “¦ New York becomes even smaller at this event.”

Lisa Bianco performs at CMJ on Saturday at 8 p.m. at the Village Underground with a full band.