This review originally appeared on ReviewCenter.com in 2002. It scored a 9.1 at the time.

KOEI is most widely known for kicking out strategy games. So the last thing this reviewer was expecting from them was an extremely entertaining music/rhythm game. KOEI has managed to not only avoid the common pitfalls of breaking into a new genre but also manages to kick the entertainment value up a notch or two — or three.

Gitaroo Man is the story of a kid named U-1, who, despite his highly original name, is constantly picked on by his classmates and picked over by the girlies. What no one knows (including himself) is that U-1 is the last of the legendary “Gitaroo Man.” Aided with a psychotic-looking guitar and a sarcastic, talking, transformable pet dog, U-1 is charged with saving the planet of Gitaroo from the clutches of the sinister Gravillians family. Along the way U-1 will learn to believe in himself, fall in love with a Bajoran and save the universe with the sound of music.

All in a day’s work. 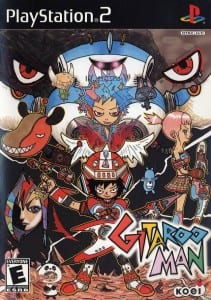 Gitaroo Man is a musical-rhythm game along the same lines as Um-Jammer Lammy, or Space Channel 5. However, this game goes far beyond simple ‘hit the corresponding button at the appropriate time’ philosophy. When you are playing, because of the intricate motions that you have to go through to make your guitar sing, you feel as if you really are a skilled guitarist. You feel as if the awesome sounds being emitted from the TV should somehow be credited solely to you. KOEI has done a terrific job in keeping the transcending feeling of creating music intact.

There is a girl named Kirah who U-1 finds on a foreign planet and attempts to serenade her. The game’s manual describes Kirah as “shy and reserved with the heart of a warrior.” This suspiciously named girl is wearing a dress, on which the Star Trek Federation Communicator symbol is blatantly embroidered.

Graphics are cartoon styled, but not flat like Parappa. As you are engaged in musical-combat the action will evolve into a crazy, beautiful, 3D rendered cartoon. Having to pay undivided attention to making sure you are hitting the right buttons, and pushing the left analog stick in the proper direction makes it easy to overlook the wonderfully rendered on-screen action. Watching someone else play the game can be nearly as entertaining as actually playing it for that reason. Perspective changes around like a wild 3D cartoon hopped up on an illegal substance but can be most closely likened to a Parappa-view.

Gitaroo Man’s soundtrack is definitely it’s crown jewel, the music in the game sports some of the most catchiest tunes ever to grace a video game. The Japanese music group COIL produced the musical aspect of the game. Everything from heartfelt, catchy, guitar riffs to happy-happy J-pop is in attendance. There are 12 songs in total. You cannot help but bob your head in rhythm with the music along with Gitaroo-Man and his entourage. At times the grooves are so jammin’ that you will find yourself making a complete ass out of your person by providing auxiliary sound effects, sporting crazy guitar-playing-facial-gestures, and trying to get that trademark guitar “twang” by shaking the dual shock.

Voice acting is unique and fits the theme and style of the game flawlessly. From the high-pitched voice of Panpeus (the game’s equivalent of Glass Joe) exclaiming, “The Gitaroo is mine! Can I eat it?” to the leader of the Gitalline people of the planet Gitaroo who sounds nearly identical to the obnoxious old man in Ninja Scrolls or Goku’s mentor in Dragon Ball.

There are three different phases per round: Charge Phase, Battle Phase and Final Phase. The Charge Phase is your chance to increase the life-bar of U-1 by using the left analog stick along with the ‘O’ button to perform various guitar riffs. The Battle Phase will have you executing the same tricky-stick combinations but instead of charging your strength it will damage the enemy, also in Battle mode the enemy will instrumentally attack you so you must hit the correct sequence of buttons to defend. The final phase has you laying down the block-rockin’ beats to perform an aural fatality on the opposing character. It may sound complicated but believe me, after 10 minutes you will be kicking out the jams like a pro. What it all boils down to is that if you play good then you deal the enemy damage. If you play poorly, then you take damage.

One annoyance with the game though is that when you hit pause for whatever reason, you are forced to restart the level from the beginning.

Finishing the game once through on normal mode will open up “Master’s Play.” Master’s Play will take you through the same 10 levels but this time around you will be required to shred your axe in rhythm even faster, and enemy attacks are more devastating as well. There also seems to be some minor modifications to the levels as far as background characters and various on-screen goings-on.

Aside from the standard single player mode KOEI included a few additional modes and bonuses to extend the life of the game. Vs Play is a worthy addition, allowing you to play against a human opponent. The gameplay dynamics are the same, allowing you to charge your energy, attack, defend, and deliver a finishing blow. This mode screams ‘on-line play’ but as we all know, internet connectivity is not something Sony seams to want to deliver on until they can get a system up and running that they can charge for. You can also assign your opponent in VS mode to be computer controlled if all your friends are on vacation. The other bonuses are Theater and Collection. Theater allows you to view all the CG cinemas you have witnessed thus far. Collection offers up illustrations of characters and vehicles in the game, complete with bios. You will have to beat the game on Master’s Play in order to “catch’em all.”

Gitaroo Man is a surprising, welcome, diversion to the as-of-lately stagnant music/rhythm genre. Fans of previous rhythm games will eat this title up like a kid in a candy store, and even casual gamers who rarely enjoy games of this nature will surely find a place in their heart for Gitaroo-Man. Quite simply, Gitaroo Man lays the funk down on all competing musical games currently on the market with enough left over style to put a particular K9 back in the doghouse