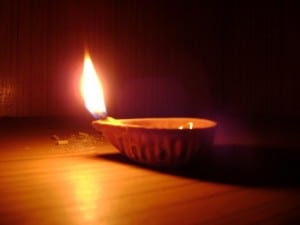 Hey everyone! Happy Diwali! Even if you aren’t Hindu, take a second to light a candle, a diya (a small earthenware candle), or if you’re really ambitious, a firecracker.

Diwali’s roots vary throughout India. As one traverses India’s gorgeous landscape, one can uncover a plethora of different mythological tales to explain Diwali’s origins.

Many see it as a day to celebrate Lakshmi, the goddess of wealth, by adorning her alter at the temple with money or pictures of material goods. Some gamble on Diwali too, because, as the legend goes, the goddess Parvati played dice with her husband on Diwali and declared anyone who gambled on the same day would fair extremely well.

The most popular tale

The most widely told Diwali tale goes like this:

Prince Rama was chosen by his father to become the new king of Ayodhya. The Queen Kaikeyi however, though initially ecstatic, is poisoned by her servant and begins to fear for the future of Rama’s brother, Bharata. The servant leads her to beleive Rama will do terrible things to Bharata to keep power in the kingdom. Because Kaikeyi saved her husband’s life earlier, the king promises to comply with her wish that he banish Rama from Ayodhya.

Rama obeys and, along with his wife Sita, descends into the dark, gloomy and ominous forest. While there his‚ wife is kidnapped by the demon Ravan, the ten-armed, ten-headed king from Sri Lanka. Rama, devastated and depressed, sets out on a mission to find his lost wife. When he eventually does, after conquering several emotional and physical obstacles over the course of years, he kills Ravan and retrieves his wife. Rama and Sita then journey back towards Ayodhya.

As the two near their kingdom, it is pitch black out. No moon and, of course, no street lights. Villagers hear of their approach and, to help them find their way, light candles outside their homes so they could safely find their way home.

When the two finally find their way back, with the help of kind villagers, Rama is crowned as king.

And thus began the celebration of Diwali; the festival of lights.

I’m off to celebrate. Happy Diwali!