The original Wii Fit was a commercial success, but it also was an important step in getting many gamers off of the couch and into better shape. Nintendo has never claimed that Wii Fit is the be all, end all of weight loss solutions–or that you are even guaranteed to lose weight by using it–but as a companion to additional exercise or as a way to keep yourself limber thanks to aerobics, yoga and strength exercises, it’s a success. It’s less expensive than most workout and exercise materials (never mind a gym membership) and you can use it from the comfort of your living room when it’s convenient for you.

Wii Fit Plus is an extension of Wii Fit, meant as an upgrade to replace the original. The question here is whether those who have already purchased Wii Fit can find anything worthwhile in this version, or if there is now enough included to bring in some of the skeptics from the past.

The short answer: Wii Fit Plus is a better exercise tool than the original, and a better game. There’s more emphasis on the game portion this time around, with 15 new activities–many of which are mini-games exclusive to Wii Fit Plus–and more attention paid to multiplayer and competition. Sure, they aren’t the most strenuous exercises around, but the key thing with them is that you have fun while you’re exercising–anything that keeps you from noticing you’re doing something healthy is good by me. Think of Wii Fit Plus as a Fitness Ninja that gets the job done without you ever noticing while it’s happening. 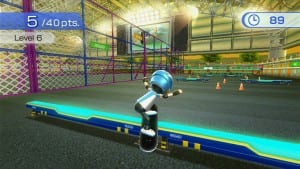 The new games are meant as a fun diversion though, and not as a replacement for strength training and aerobics–don’t expect to lose weight by replaying Rhythm Kung Fu or golf over and over again, even if they are fun and working modes. There are plenty of other enhancements to Wii Fit Plus that make it a better workout tool. It’s more family oriented now–you can weigh your pets and babies if you want, which is fun in its own way even if it isn’t necessary. There’s a calorie counter, which tracks how many calories you have burned during your workout. This is done by using METS (metabolic equivalent of task) which basically measures the amount of time you work out by the METS number for said workout to give you an idea of what you’ve accomplished. To give the calories some context, you can also compare the total to different food items within Wii Fit Plus, or pick a food item equivalent worth of calories you plan to burn each day. Have a need for a soft serve ice cream every day, but don’t want to put on extra weight? Make that your workout goal and burn those roughly 200 calories. This also serves as a wonderful reminder of how awful fast food can be for you–see how willing you are to shove two cheeseburgers from your favorite drive thru into you after you see that it will take you half a day of exercise to work it all off.

Have a certain area you want to work on? Maybe you have a schedule of workouts you want to rotate if you use Wii Fit Plus all the time? Thankfully, you can now create custom routines or use ones that the game has in mind for you, rather than just mindlessly choosing exercises and programs like in the original. This is something I enjoyed, as I don’t mind doing the aerobic exercises daily, but like to switch up yoga and strength training so I don’t overdo it. This is also good for those of us who may not want to use the mini-games very often, but prefer using this for a legitimate workout tool. 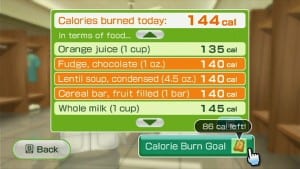 I’m not a fan of the Wii Fit Age setup. It worked well for Brain Age, but when you just do a few of these per day and at random–and I, like many others, probably do this early in the morning when their body is awake but their brain is still napping–the results are going to be negatively skewed. I already have tools to measure my brain’s age, so let’s stick with how my body is doing in the future instead of linking them up. Thankfully, you can always skip these and just get your updated weight and progress.

For those of you who do not work out everyday, you can install the Wii Fit Channel on to your Wii Menu, and check your daily weight from there. This is also nice since you don’t have to switch discs a bunch of times if you want to play a game right after your workout. With SD card support, you also have no excuse to not have room for the channel.

Another issue with Wii Fit Plus is that it uses BMI still. The weights it estimates for many users, including myself, are not always as healthy as the game thinks they are thanks to BMI. I’ve been at the weight the game suggests before, and it’s a good 5-7 pounds below my own personal comfort level. That being said, you can make the mental adjustment–like I just said, I know I should be about 5-7 pounds above what Wii Fit told me–and still appreciate the software for what it does right rather than focusing on what it doesn’t do.

If you already own Wii Fit and have a Balance Board, Nintendo has not forgotten about you. Wii Fit Plus is available in standalone form for $20, which is a great deal considering that it is the superior software and has loads more to do than the original.If you are sans Balance Board, you can pick this up for $100, $10 more than the original. I’m not pleased with that price increase, but it’s also much less expensive than workout equipment or a gym membership, as previously stated, and worth the money.

Blast Factor: Wii Fit has shown itself to be much more than a passing fad, and it now has an updated version that fixes many of the original’s issues. The calorie counter, the food comparisons, the customizable workouts, and the emphasis on making this more of a game help the Plus version of Wii Fit stay true to its name. If you already own Wii Fit, you should pick this updated version up, and if you haven’t jumped in yet but need an excuse to get off the couch, then Wii Fit Plus is the answer for you as well.

Wii Fit Plus is available exclusively for the Nintendo Wii, and retails for $19.99 by itself and for $99.99 with a Balance Board peripheral. A copy of this game was given to us by the publisher for review purposes.