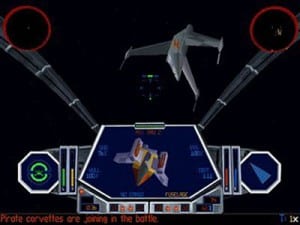 I suppose I had a weird video game upbringing.

Between friends’ houses and arcades, I played everything growing up, but what I had at my house was different. I owned an NES, but a Genesis instead of SNES. I owned a Dreamcast and a PlayStation but an Xbox instead of PlayStation 2. Now I focus on PlayStation 3 instead of 360, but occasionally play Wii.

Though I admit I mostly play Wii for Virtual Console lately. And I recently bought the retro video game player on Think Geek.

And all along, I always loved PC games. It was a victory to figure out the perfect Autoexec.bat and Config.sys file so that I could get most of the games to run on my old 486SX PC that ran Windows 3.1 — it came with 4MB of RAM, but we upgraded it to a whopping 8MB and added a CD-ROM drive.

One thing I did miss out on: I didn’t play the Final Fantasy series growing up.

There have been some amazing games made lately, but nothing has ever sucked me into a virtual world like some of the games I played when I was young. Even with the realistic sounds and graphics of today’s games, it was the nuances of childhood games that stuck.

Here is my list of the 10 games I played the most.

The games are the purest example of simplicity. There’s some story mixed in, but really these are arcade games. They’re fun, challenging, addictive, and satisfying.

Up up, down down, left right, left right, B-A-B-A, Start. That got you 30 lives, instead of the impossible three that you started with.

Though, I beat the game on 4 lives on the Think Geek retro player recently. It’s like riding a bike. Just get that first “Spread” weapon and never lose it.

Contra is a shooting-based platformer with sequels that range from impossibly difficult to absurdly bad. But the original stands as one of the best games ever made, and it was one of the first multiplayer action games that felt rewarding enough to repeat.

Because everyone wants to relive that ride home in a helicopter.

Do I really need to explain much here? The platformer genre never got any better after this. The Mario Bros. were in their golden age here.

This was also a big game to hit with Game Genie codes, especially in — I think it was — World 4 with all the sky levels.

Shining Force will make the list twice. Remember, this is a list of games I dedicated the most time to. Shining Force II was a lot harder than the original Shining Force. It wasn’t as intuitive, and though I played the original a lot more often, it was the sequel that eluded me for a long time, especially after the Sega Channel dropped the game from its list.

For the longest time, I couldn’t get past a certain point where I had to interact with a hollow oak tree to obtain an ancient caravan that would let me progress further in the game. It was a shock when I finally figured it out.

The entire PC combat flight simulation genre came to an apex here. Jane’s and Electronic Arts had success with both Navy Fighters and Advanced Tactical Fighter. So when they combined the games into one title and added several more campaigns, the result was a three-inch thick box with an (unnecessary) novel-sized manual and two CD-ROMs.

The game was sick. You could spend days flying around Vietnam, Russia, Ukraine, China and even Cuba. You career spanned some 50 years, from F-4’s in Nam to F-14s in a 1998 Russian invasion of Ukraine to F-22’s and X-31’s in Egypt in the early 21st century.

The game also had a rich following from third parties who developed an assortment of modifications, including new plans, weapons, buildings and even nukes.

This game, too, disappeared from Sega Channel. It disappeared before I could beat it. Years later, I would trade in some then worthless Dreamcast games for the Shining Force cartridge.

It was actually emotional to beat this game. The strategy, the sacrifice. The game told a story and forced the imagination into overdrive.

I still play these next four games whenever I can. Doom started it all for me. It was the first game I ever installed from a CD-ROM.

I played the shareware first episode of Doom for months. It was only nine levels (I forget if the bonus level was in the shareware), but there was something about shooting imps and shotgun-toting former human sergeants that’s still addicting.

We didn’t get The Ultimate Doom, which included the three original Doom episodes and a fourth called “Thy Flesh Consumed,” until years after we bought Doom 2.

The levels were better, the enemies were more plentiful and there were two new weapons. I’d brag — I have gone through the entire game without cheats on Nightmare. I probably can’t do it anymore.

The only way we ever improved on Doom 2 was by playing Doom 2 for Windows 95 over our home network, without lag.

Be thankful kids, Doom’s deathmatch paved a blood-stained road that leads right to your Slayer matches in Halo 3.

There’s a healthy mix of action and RPG in this mix of games, but nothing (except maybe the next title) can possibly match the depth I found in Phantasy Star IV.

Not only was the game a graphical wonder with depth of character development and attack technique, but it was a wicked long game to beat. The game goes on forever, and you can’t just skip through it. You have to fight every battle and gain every character level to even have a chance at taking on the final boss.

Phantasy Star IV is also in this sort of cyberpunk post-modern fantasy world with remnants of ancient, advanced technology despite the primitive, agrarian lifestyle of the characters. That makes more sense if you played Phantasy Star I-III, but the fourth installment was the best.

It was such a perfectly made game. It was stylized but not over the top. It had dialog you could understand. It had character development. I dare you not to shed a tear when Alys dies.

Karma is something you earn.

I still wish there was a 16-bit sequel to Shadowrun. I didn’t like the popular SNES Shadowrun RPG. It was the totally different Genesis game that owned me.

It’s all about depth. Character development, conversations and interactions, weapons, magic, guns, computers, dragons, elves, trolls and evil mega corporations in 21st century Seattle result in one of my favorite games and #2 on my most played list. You could even ignore the plot and become a mercenary or freelance computer hacker.

This was Shadowrun. There was as much reading as there was shooting. Don’t even talk to me about the newer Xbox 360/PC game that happens to be called Shadowrun. It’s a disgrace. It’s pitiful. It’s sacrilegious.

The hair on the back of my neck stood up and a fight or flight response triggered the first time Admiral Harkov betrayed me to die in a Rebel minefield while flying Tie Interceptor Gamma 1.

I was doomed. The Victory Class Star Destroyer Protector was firing on me and a Rebel cruiser dropped out of hyperspace to back up the traitors. I, a loyal Imperial naval aviator, was singled out for a creative extermination.

Then the cavalry came. The Modified Frigate Osprey, carrying shielded Tie Interceptors from Theta group arrived to pick me up from the clutches of certain death.

I was born after the original Star Wars trilogy and way before Episodes I-III. I didn’t read the books growing up. It was this game, which still ranks as one of the best computer games ever released, that gave me my Star Wars education and left me rooting for the Empire from then onward.

Tie Fighter Collector’s CD puts you in the cockpit of the Empire and immerses the player in a world of intrigue, open war and piracy. The full voice acting (one of the first games to do it) and sound effects are forever burned into my mind. And when the throes of dementia take me later in life and I end up spouting off “Die Rebel Scum” and “Peace between the Dimok and Ripoblus!” in my nursing home, you’ll know why.