Valve today announced that a demo for Left 4 Dead 2 will become available October 27…for those who pre-ordered.

Ah, the joys of pre-order incentives. 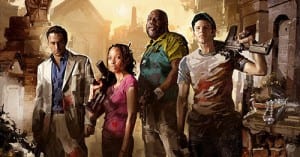 Wording is tough on this one, so enjoy this breakdown and when you’ll be able to kick some zombie tail.

Those who pre-ordered– October 27

The demo will take place during the events of the “Parish” campaign set in the French Quarter of New Orleans and will will let one to four players game together online or locally on both the Xbox 360 and PC versions.