When Activision first announced Band Hero, I cringed at the thought of a kid-friendly Guitar Hero game, but today I sing a different tune.

Activision unleashed the Band Hero demo on Xbox Live this morning. The trial comes with three tunes from Taylor Swift, Finger 11, and Katrina & The Waves, as well as Party Play mode from Guitar Hero 5, and the ability to try out the game’s brand new Sing-Along game mode.

The first thing you’ll notice about Band Hero is that it looks and feels just like Guitar Hero 5. The game features minor aesthetic changes, mainly adding brighter colors and lots of pink, but it still looks wonderful.

From the main menu you have three options. Play Now, which will drop you directly into the song being performed in the background, Start, which allows you to pick any of the three tunes and start from the beginning, and Sing-Along, the demos’ only new feature. 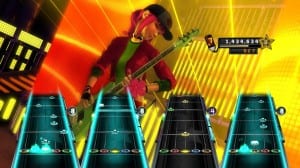 The addition of Sing-Along mode speaks directly to Activision’s clear pursuit of accessibility and fun. In this mode, up to four players can sing along to a song using one USB microphone or headset. It’s very much like Karaoke. The words appear on the bottom of the screen in two line phrases and you cannot fail. I tried my hand at Paralyzer, the only song with a male singing, and I, for the first time, felt good about my general aptitude at singing. Additionally, the scene that transpires on-stage while you’re singing is a sight to behold and one that really makes you feel like a rock-star. Hell, you can even think of Band Hero as a 65-song Karaoke machine if you’d like.

I tried drums, guitar, and singing, and all of them felt just like Guitar Hero 5, but this is no problem whatsoever. Guitar Hero 5 is a truly excellent title and even if Band Hero is simply the same game with a few new features and a different target audience, it still excels at what it needs to: gameplay.

There’s no doubt Band Hero will be quality product when it releases next month, and with its kid-friendly song list, it’ll likely fly off shelves for the impending Holiday season. From my time in game retail I’ve seen first-hand the dismay of parents concerned about scantily clad women and provocative songs, both of which do not exist in Band Hero.

Blast Factor: The Band Hero demo is fun, and lots of it. Party Play is as solid as it was in Guitar Hero 5, and the addition of Sing-Along mode is tremendous, and essentially morphs the game into an always fun session of Karaoke. Sure, the song-list is kid-oriented, but with the Holiday season rapidly approaching, it may be just what parents everywhere are looking for.