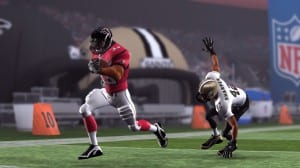 Madden NFL Arcade is not your father’s football game. Each team is given only four downs to march 60 yards to the end-zone. No field goals or penalties either, just pure adrenaline-packed football. The first team to 30 points wins, and with a total of 13 “Game Changers” including the ability to add “entourage of lineman to get the sack, freeze an opposing player, turn off your opponent’s passing icons, and much more” the game will likely stay interesting for a long time.

The game also supports four-player co-op on the same console and online head-to-head matches with leaderboards, to push the statistic-minded gamer over the edge. The game also has a “host” of Achievements/Trophies if you want to share your on-field success with the world. 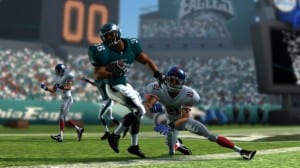 “When you look around the office and see your whole team playing and having tons of fun with it, you know the game hit the right mark” said marketing director Nathan Stewart. “We have diehard Madden fans who have worked on the franchise for a decade, and more casual gamers who are all playing together and enjoying it. If our productivity the past few weeks is any indication, we’ve created a game that everyone will love.”

I won’t lie. This game sounds extremely fun. A pick-up-and-play Arcade football game with the Madden name with all these features for $15? Count me in.