A billboard on a movie-set in Louisiana spotted today shows “Resistance 3” and a possible game setting of New York City.

The photo, which popped up on NeoGAF, was reportedly taken in Shreveport, Louisiana on the set of the upcoming film Battle: Los Angeles.

According to its listing on IMDB, the film is being made by Columbia Pictures, which Sony owns, and is scheduled to release February 2011.

Speaking with IGN, an Insomniac Games representative said‚  “We’ve made no announcements at this time,” which sounds a lot like “Yupp” to me.

In the lettering of Resistance on the billboard, the Empire State Building and Statue of Liberty are clearly visible, begging the question, is the third installment set in New York City?

Just so we’re all clear. This image is from a movie set, but when Sony or Insomniac Games decide to break the silence, you’ll hear it here! 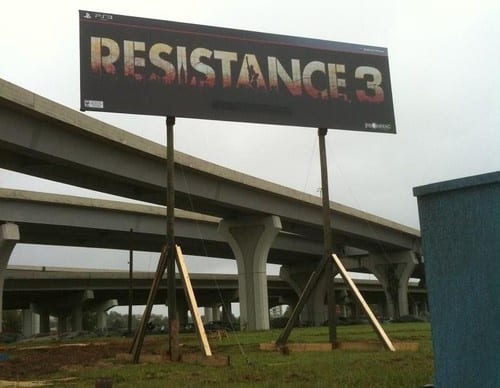