Break out the cigars because Amy is about to become a mother. But don’t start buying gifts just yet. The baby might not even be human.

Just what the hell are we talking about?

A woman’s ultrasound surfaced this afternoon and it bears quite a striking resemblance to DryBones, the Bowser minion who’s given Mario hell for years. The image also came with this statement: “I think maybe Amy has been playing too much Nintendo…” 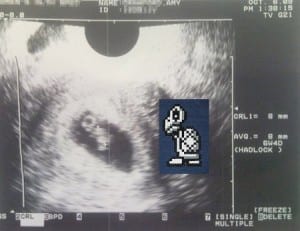 Now, since we know for a fact Dry Bones’ are skeletal reanimated mummified Koopa Troopas we’re highly skeptical that this image is real. Unless…nah, we won’t go there. And yes, we’re kidding.