Continuing with where we left off the other day, here are five more Super Nintendo classics that deserve a place on the Wii’s Virtual Console. This one’s a bit less RPG heavy than the previous entry, so if you dig things other than role-playing games, you may be in for a treat. After going through my memories and the list of games I never got to play but want to, it’s looking more and more like this is going to go 15 deep rather than 10. Get cracking, Virtual Console. We’re waiting.

Star Fox was an impressive achievement when it first released for the Super Nintendo back in 1993. It utilized the Super FX chip, designed by Argonaut Games, in order to achieve Star Fox’s 3D style gameplay, and helped pave the way for future 3D titles thanks to its success. This chip was a microprocessor that could do things with 3D that the Super Nintendo could not–remember, the SNES was known for its ability to fake 3D with its Mode 7 capabilities, but true 3D was out of its initial abilities. Argonaut and Nintendo simply installed the chip in the Star Fox cartridge so that the SNES could handle the 3D held inside. 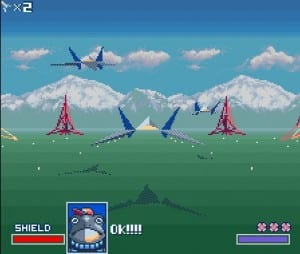 Even in caption form, Slippy is annoying.

In addition to its technical pioneer status, Star Fox also established yet another Nintendo franchise that would see sequels, spinoffs and appearances in games like Super Smash Bros. Though it is not utilized as often as Mario or Zelda, or as critically acclaimed as Metroid, it’s still one of the big boys from the Big N. Star Fox 64 is available on the Virtual Console, which may be why the original is not available; it’s still a fun game to play, but its sequel enhanced every facet of the game, and is the more famous one for a few reasons (Do a barrel roll!)

As for the gameplay, it’s an on-rails space shooter, though you can control your speed with thrusters and fly around to avoid objects and collect items. It has a very arcade feel to it, which makes it different than most Nintendo franchises. I also find it kind of funny that they have more 3D space shooters than old-school 2D shoot-em-ups, especially given how far back the company’s history and game development goes. Most of the games in the series have been this way–the exception is Rare’s entry in the series, the GameCube’s Star Fox Adventures. That’s a game people love or hate (or love to hate) thanks to its departures from the series norms, which you can’t blame people for given how strong those roots are. (Then again, a lot of the people that complained about Star Fox Adventures are probably the same people that complained that Namco’s GameCube entry was too similar to the Nintendo 64 game). 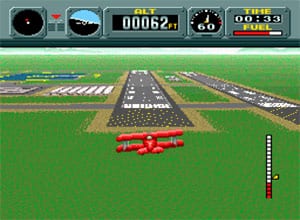 Mode 7 was very impressive for its time, and helped show off the power of the SNES

This is a series that is screaming for a Wii sequel, especially given how neat the flying mechanic in Wii Sports Resort (Motion Plus!) is. The original was a launch title–you had this, Super Mario World and Sim City, three titles that still hold up today and are considered classics by many. Pilotwings did not utilize 3D like Star Fox did for its flying–this was a few years before the advent of the Super FX chip–but it was capable of rendering what appeared to be 3D thanks to Mode 7–when flying, objects on the ground appeared to be popping out of it naturally in three dimensions, but when you would land or come very close to the ground you could see that they were flat and on top of the ground–if you’ve ever watched the camera pan closer to the landscape in an SNES title utilizing Mode 7, you can picture what I’m talking about.

There’s a lot more to do in Pilotwings than just fly planes, as you can also use a hang glider, a rocket belt, or a helicopter, and you can also go skydiving (again, Wii Sports Resort makes me feel like Pilotwings Wii is necessary). Though the Nintendo 64 entry (also a launch title) may be the better game, the original is a lot of fun, and neither of them are on the VC. It’s been over 18 years since the original released and 13 since its sequel hit–it’s time to put them back on a Nintendo console, first Virtually, then maybe with a proper sequel.