Wii gamers won’t get the kind of graphical fidelity Xbox 360 and PS3 gamers will with their versions of Tony Hawk: RIDE, but they’ll score two prizes the others wont.

IGN revealed today that the Wii version of Tony Hawk’s latest foray in the game-world, will allow you to use your Mii as a playable, skateable character and that two Wii-exclusive maps will be in the final product. 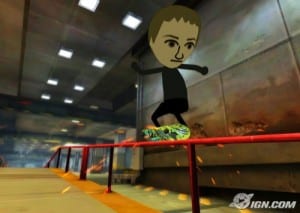 Additionally, Mii versions of professional skateboarders including Paul Rodriguez and Steve Nesser are in the game, if their actual character models just don’t do it for you.

“One of the big wins for us is that you can skate as your Miis,” said Yale Miller, Tony Hawk: Ride’s producer. “We kept asking to get this feature in, and Nintendo liked what they saw.”

Buzz Monkey, developer of the Wii version of RIDE, also built two levels exclusive to the game. It’s likely not enough for a multiple system owner to jump to the Wii version, but at least it’s something.