Konami is running the nostalgia-train full steam ahead as of late. The publisher’s released renewed versions of Contra, Gradius, and the soon to be Castlevania, in the form of the Rebirth series, but today takes their efforts a step further with a very beloved franchise.

Konami today detailed their plans to release Rocket Knight Adventures on the XBLA and PSN, but unlike the Rebirth series, it’ll take on a full-on 3D graphical makeover while holding true its solid 2D roots. 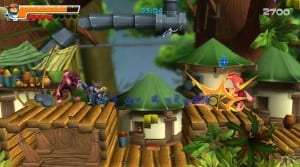 Rocket Knight Adventures was born on the SEGA Genesis some 15 years ago, and has since seen multiple spin-offs, but this one, based on 1UP’s early preview, sounds fantastic and worthy of a spot on my hard drive.

Head on over to 1UP for the full written preview. It’s a great read.