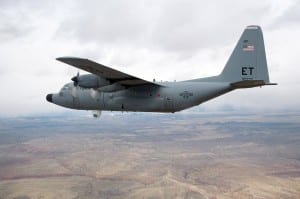 Here at Blast, we often lament how the future seems, well, not very futuristic. But just as soon as we might give up hope, we find a story like this one, about laser beam weapons. What could possibly be any cooler?

Shooting from a plane in the sky at Kirtland Air Force base at the White Sands Missile Range in, this was the first time the laser had been switched on with the intent of casing damage. And damage it caused, as evidenced by the video the Air Force released of the weapon in action.

The weapon was developed by Boeing for the military to use in dense urban environments, where highly targeted weapons are valued to minimize collateral damage. “This milestone demonstrates that directed energy weapon systems will transform the battlespace and save lives by giving war fighters a speed-of-light, ultra-precision engagement capability that will dramatically reduce collateral damage,” said Greg Hyslop, vice president and general manager of Boeing Missile Defense Systems.

Even though it may appear that this is the Air Force preparing for a battle with Megatron, the weapon, along with a similar sibling laser to be mounted on a 747 as a missile defense system, still have more testing to undergo before they’ll be completely combat ready.