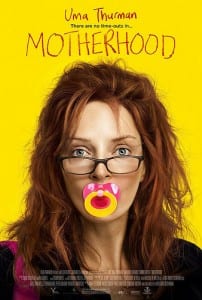 It’s just one day in the life of Eliza Welch — a mother of two, former writer and chronic blogger.

It seems simple enough on the surface. Today, she needs to get her daughter to school, take care of her toddler son, blog and prepare for her daughter’s sixth birthday party, along with a list of other errands. Then, she decides to enter a contest for a parenting magazine: 500 words on what motherhood means to her.

Now it’s not so simple. Adding to the chaos is the fact that she lives in a tenement walk-up in New York City’s Greenwich Village. Not only is there an endless line of physical obstacles, like a towed car, there is an endless sea of people ready and willing to criticize her.

It all culminates in a breakdown. The once promising, creative and inspired writer fears she’s lost herself in motherhood.

“Motherhood is a thing that can be terribly under-appreciated,” said Uma Thurman, who plays Eliza, in a recent interview with Blast. Even mothers themselves deride their own job, she said.

And that’s just why director and writer Katherine Dieckmann wrote “Motherhood.” The experience doesn’t parallel any of the usual extremes. It’s not “Leave it to Beaver,” nor is it “Mommie Dearest.” It’s a continuous barrage of larger problems, mindless minutia and judgmental by-standers; all of which can quickly make an intelligent, creative woman question herself.

“I wrote it because I was very frustrated with the absence of movies about mothers,” said Dieckmann. “What is motherhood really like? What happens to a woman’s psyche and sense of self?”

For Thurman, also a New Yorker and mother of two in a creative industry, Eliza’s story is familiar.

“I felt very moved and much related to Katherine’s writing,” she said. “I relate to (Eliza) as a character in many ways. I’ve had that day, in my own way.”

And almost as important as Eliza are the people that surround her. Avery, her husband played by Anthony Edwards, quietly endures an unfulfilling job to bring in money. Sheila, her best friend played by Minnie Driver, is the single, sex deprived mom who becomes the unwilling subject of a blog entry. Then there are the other mothers – the wealthy snob mom, the over attentive mom, the slightly crazy new-age mom and more – all ready to offer their opinions and judgments without being asked.

Even the 20-something guy in the party store and some old ladies on the street had rude lectures to dole out.

New York itself becomes a problematic character too. Streets crowded with tourists, a film crew, heavy traffic and tenement living all make Eliza’s day even harder. That’s why, Dieckmann said, she chose the city as her setting. Suburbia just doesn’t present as many challenges. Your life is planned differently and ordinary tasks become more difficult.

“There’s something about the peculiarity of life in New York,” she said.

“Motherhood” doesn’t glorify its heroine, though. Eliza isn’t always right. As Thurman put it, “She’s trapped in her bubble.”

Eliza begins to face doubts about her parenting skills, her marriage and her creative self as she tries to answer the question, “What does motherhood mean to you?”

“She sort of agrees with the deriding of her own job,” Thurman said, thinking about a particular scene. “Is it important? Do I have anything to say? Am I just another mother in this park?”

And that’s the central theme of “Motherhood.” How does a mother successfully raise children while maintaining a sense of self? What happens to passion and creativity when all she can focus on are physical daily tasks? It’s a delicate, difficult balance.

So what does motherhood mean to Thurman?