This review originally appeared on ReviewCenter.com in 2002. It scored a 7.9 at the time, right as the site changed from 5 stars to a 1-10 scale.

Surprisingly, and to the shock of many veteran gamers, there is an entire generation of up and coming electronic ball busters that are not familiar with the origins of Maximo. It’s a sad-but-true fact that I’m sure many of us would rather just as soon turn a blind eye to. But think about it, this new generation of gamers is going to be raised on an entirely new caliber of quality, and soon new will be old. And the absence of old knowledge will perpetuate Moore’s Law. I don’t mean to go all Hideo Kojima on ya’ll, but the passing on of knowledge is what causes great games like Maximo to be created in the first place.

Maximo was originally intended to be released on the N64, then after the development team realized that the limitations of the N64 hardware would interfere with their creative freedom, they turned their focus to the Dreamcast. After Sega declared the DC DOA, the game was optimized for the PS2 hardware. I’m sure Capcom will make a pretty penny because of this decision, but we’re left thinking Maximo could have been released on the Dreamcast. It brings an oversized Japanimation tear to my eye. 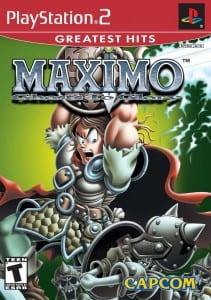 Many gamers have become spoiled with features that are often taken for granted. Back in my day we did not have save-anywhere features. We had to traverse the entirety of a level aided with nothing but our wits and a 2-button control pad. I come from a generation where continues were not passed out like candy at Halloween, we had to work for them! And work we did. Do you know what its like to progress through 80 percent of a game only to be informed that you have to start over again due to lack of continues? Well if you don’t, you will. Maximo throws out the idea that gamers should be hand-held or spoon-fed during the course of the game. While not anywhere near as difficult as Ghosts N’ Goblins, Maximo still retains that old-school ‘if you want it, be prepared to work for it’ philosophy. Luckily, Capcom keeps the experience incredibly entertaining, lubricating the all too common annoyance of having to restart a level (or in some cases the entire game) with smart level design, slick visuals, and an overall feel that brings us back to the good old days of pizza-greased joy pads that would inevitably be thrown on the ground in frustration — only to be immediately picked back up to give it one more shot. Enter Maximo.

Maximo sports some impressive visuals. It’s hard to imagine that Capcom Digital Studios created the foundation of this game to run on the lowly N64 hardware. What may be even more surprising is that they have created this game to load entire levels into the measly 4 MB of video ram of the PS2, it seams developers are finally getting a true sense of the system’s intricacies. You can literally eject the CD from the disc tray and continue playing the game right on to the end of the huge levels; animations, sound effects, secret areas, all intact.

Huge draw distances, reflective metal armor, and an almost cinematic approach to perspective are some of the things you should expect from Maximo graphically. Zombies will abruptly sprout up out of the soil in classic G&G style, ghosts will appear out of the woodwork, and huge environments will violently modify themselves drastically, and without warning. Imagine playing Ghouls & Ghosts on the SNES, now give the game a beautifully rendered 3D makeover, throw in a bounty of new graphical nuances and innovations, set to puree and you’ve got a basic understanding of what to expect from Maximo in the visuals department. This game pays homage to the 8 and 16-bit era of the series while also realizing the potential of the current state of the art.

As expected you will see a lot of Maximo running around in his skivvies, which looks particularly nasty in the Ice World stage of the game. You may find it interesting that Maximo can buy different styles of under garment, everything from the infamous red-heart pattern currently being pimped out in all of Capcom’s advertising attempts to a simple-yet-tasteful cow spot design. The different kinds of underwear have absolutely no effect on anything, and merely serves as an aesthetic diversion from the default boxers.

You may recognize many of the game’s tracks from previous G&G games. Those old-school beats are back in a big way; retooled, tweaked, and modernized for your enjoyment. The music compliments the detailed, eerie, visuals subtly enhancing the overall enjoyment of the game, and doubly so for those who are familiar with the series’ heritage. As many people already know, the memorable soundtracks in the previous games made up a large part of the experience and often would kick around in your head long after you stopped playing, fortunately the same can be said about Maximo.

Sound effects are surprisingly realistic. Swinging your sword at a tree will result in a thick organic ‘thunk’ sound, striking metal will have a clanging, reverberating, realistic metallic sound to it. Supporting the oft-overlooked positional stereo sound, enemies can sometimes be heard rustling in the distance, hearing the direction that monsters are coming from is particularly useful for staying alive.

Character movements are sharp and precise, and death can sometimes be a matter of a few microns. Gameplay is based on the same simple dynamics found in the original game; jumping, double jumping, attacking, and throwing your shield are all executed with ease. Because of the immediate familiarity with the control scheme, you will find Maximo is very easy to pick up and play. So when you die, the blame can rarely be placed on anything but your slippery thumbs. The camera can get distracting on a few small spots in the game but luckily you can kick it into FPS view at (most) any time and look at your surroundings as viewed by Maximo by holding R1. You can also line the camera up with your POV by hitting the L1 button.

Multiple elemental sword power-ups are available to aid you in your quest. Fire, Ice, Lightning, and Armageddon are all available, which increase the potency and effect of your attacks. Fire attacks are particularly devastating on the ice stages — each elemental property has different results on enemies depending on the current atmospheric situation.

Maximo’s levels are huge, requiring multiple attempts to fully explore. Luckily you’ll come across check-points as you progress through each level that are activated by performing a downward stab deep within the soil, allowing you to re-spawn at that point in the event that you come across an untimely death.

Collecting Death Coins is a necessity in furthering your progress of the game. For every 50 Spirits you collect you’ll be awarded one Death Coin, spirits are accumulated by destroying tombstones and various other objects. If you die and have no lives left, you will be sent to the underworld where Death Coins are the only form of currency that the scythe-wielding Grim will accept. At first all that is required to continue is one Death Coin, but every other time you run out of lives the price goes up. If you are unable to ‘pay the Reaper’s toll’ then its game over.

Throughout the duration of one life you gather various power-ups that fill slots in your inventory. You start out with a 3-slot capacity, that number increases by one for each set of levels you complete. Power ups that are locked into a “slot” are permanently saved, however you can utilize as many power-ups as you can get your hands on, but when you die only the ‘locked’ power-ups will remain. It gives an added sense of appreciation for the preservation of just one life. When you find a heart (one free life), you are filled with an urgency to retrieve it by any means necessary. And believe me, this game does not making retrieving free lives easy. You’ll be walking a 2 inch plank on a swaying pirate ship, double jumping over bottomless pits, and for the most part pulling off acrobatic feats that would otherwise only be suitable for a super hero.

Make no mistake, Maximo is a challenging game, luckily it stays consistently entertaining throughout. Every level offers an experience that is unique and challenging, giving you a real sense of accomplishment for progressing. Its possible to blast through the game in just a few hours if you know exactly what your doing at all times, but expect to invest around 15 hours of well spent time your first time around the block.

After defeating an end-boss you will be given the opportunity to; fully power up your armor, save the game, or receive a Sorceresses Kiss. Collecting all the Sorceresses Kisses (4 in all) will unlock an art gallery where you can check out illustrations of characters and designs from the game. Completing the game with 100% of every level explored will open up “Mastery Mode.” In Mastery Mode you will play through the opening level of the game, but this time around you will have to do it backwards with item and enemy placement changed. The monsters are hugely abundant in this mode and require skill and strategic planning to defeat.

Like some of the best side-scrolling platform games of yesteryear, Maximo requires calculating precision to successfully navigate. Keeping you on your toes is something this franchise has always flawlessly executed, and I am happy to report that this reputation is kept firmly intact with Maximo. Uttering foul language and slamming the controller down on the ground in frustration has not been this fun since the SNES days. Long live the double jump!