It’s a fair bet that if you’ve already run out and bought the second Marvel Ultimate Alliance game, it’s because you knew exactly what to expect. As the sequel to what was probably the best super-hero beat ’em up game ever, there aren’t any surprises here. Whether that’s good or bad is dependent on your opinion of the original and the genre in general.

Shiny, expansive, and fun, these aren’t tactical or intellectual games. They cut right to the core of what most people think about super hero comics–Crash! Bam! Bang! If you’re unfamiliar with the concept, here’s the skinny. Four super-heroes run through a variety of levels beating the crap out of anyone and anything in their way, eventually encountering a much tougher boss battle, before moving on to the next level to do it all over again. Repeat this for about ten or so hours and you have Marvel Ultimate Alliance… one and two. 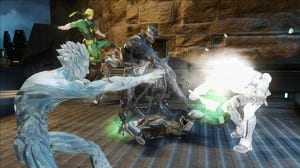 These games are essentially Gauntlet for the next generation of hardware, but with a focus on up close and personal melee combat. You can eventually choose around 30 heroes and villains of the Marvel comics universe to play as, and thanks to the clever use of the Civil War storyline from last year, heroes will be fighting each other as well. Which side of the conflict you choose affects who you’ll have access to–at least to some extent–though the opening and the final levels has everyone a bit closer together to deal with a greater threat.

The storyline is generally fine, if not exceptional, but the real draw is simply the ability to use so many familiar and obscure comic book characters. For the single player, you can switch between team member at any time, heal others in your group, and even revive them with health power ups. Also, you can switch team members in and out entirely at will. Certain team combinations have bonuses as well, so if you want to play as the Fantastic Four, they get special team enhancements for instance. 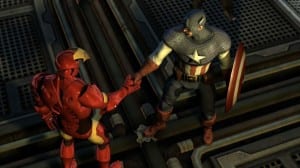 Another improvement over the first game is the use of fusions. Essentially a fancy name for team-up super moves, every character can perform a specific combo super attack with any other member of their team. Some of these attacks are a wide radius explosive blast, while others must be targeted, and still more have characters rushing through hordes of enemies cutting down everything in their path. Although some of these moves are truly spectacular, most feel like cookie cutter retread after a while, since most fusions are re-used through most of the characters.

Still, given how many enemies clog the screen, any room destroying move is welcome. The action is often so chaotic that it becomes confusing and you’ll simply be left wildly mashing the buttons because you can’t even see your character through the clutter of endless enemy drones. Another problem is that the characters often don’t feel unique enough. While stronger characters can lift heavier objects, there isn’t enough difference between the impact of Daredevil hitting a thug and the Thing. Characters who should be immune to gunfire seem to take as much damage as anyone else, and unlike Batman: Arkham Asylum, the gameplay doesn’t convey enough sense of power to these characters as it should.

Thankfully, multiplayer action is what a game like this was really made for, and the game is much more fun when playing with others either in the same room or across the internet. You can run through the main story line as a group or take on the extra challenge levels, and playing Marvel Team-up with a real team adds a lot of value to the gameplay.

Finally, the overall presentation is excellent. The graphics are sharp and detailed, the character models look great for the most part, and while some of the voice acting and dialogue is really awful, the rest of the audio is good overall. Oddly, a lot of MUA2 is incredibly dark, which tends to make the already hectic action harder to follow.

Blast Factor: Marvel Ultimate Alliance 2 definitely takes a familiar path. There are no innovations here, and very few enhancements over the first game. It’s a straight-forward, meaty four-player beat ’em up with plenty of great characters to choose from. Without a doubt, it won’t change anyone’s mind about the genre, and if you thought the first one was mindless and dull, there’s nothing to change your mind here. For fans of these games, however, it’s an impressive and expansive journey into mass destruction.

Marvel Ultimate Alliance 2 is available across all platforms; this review deals with the Playstation 3/Xbox 360 versions, and is available for $59.99