The Bubble Bobble series, born in 1986 as an arcade title, has since been ported to everything from the Commodore 64 to the Sega Game Gear to even the TI-86 line of graphing calculators. Taito, the Japanese developer of the franchise since day one brewed a most delectable game formula that to this day has fans crying out for more. The simple recipe of jumping, pushing, and popping bubbles to defeat your enemies has proven to be timeless and always enjoyable.

Enter Bubble Bobble Neo for the Xbox Live Arcade. In this remake, the gameplay remains solidly intact but its updated graphics, four-player support and newly three dimensionally animated character models really make it a desirable download for fans of the series and lovers of casual games alike. 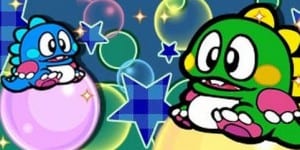 The first thing you’ll notice in Neo is its full sensory overload of a main-screen. You’ve got a wondrous reprisal of the original’s soundtrack (which will be stuck in your head), as well as bright and popping colors to enjoy every time you fire up the game.

And when you actually start playing you’ll find three game modes, but they basically boil down to either single or multiplayer. Once you’re in the game your job is to kill every bad guy on the particular single-screen stage,in the same way you did 20 years ago. Playing as one of the dragon brothers Bob or Bub, you’re able to shoot bubbles out of your mouth and trap enemies.‚  Next you can either vault off the bubbles or pop them. The former allows you to reach higher heights, necessary on some levels, and the latter kills the baddie and earns you point multipliers in the form of anything from gems to bananas. Once you’ve mastered the art of jumping, bubble shooting, and popping, you know all you need to beat the game; it never gets more advanced in the control-department. That said however, there are over 100 levels in the game, and the latter stages are tricky, finger busting toughies to say the least. 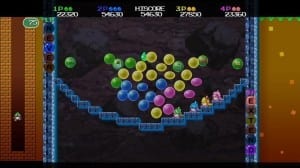 This is where cooperative play becomes not only more practical, but a lot more fun too. As enemies soon become far more belligerent and starting shooting fireballs, someone in the room can quickly and simply tap the A button and jump in with you right then and there. What I did was say, “hey, I don’t really need you until level 15 or so, mind waiting?”

The other two game-modes are Arrange Mode and Versus Mode. In Arrange Mode the mayhem balloons to four players at a time, and even though I was only able to muster up two more to play with me for a total of 3, we had a blast and adding the fourth player would have been even better. 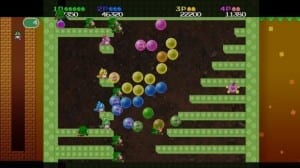 And the Versus Mode, my personal favorite, pits four players against each other in a game of survival. Basically, hordes of enemies overflow the screen and you’re tasked with surviving as long as possible while attempting to rack up the most points. And, as an added level of awesomeness, you can also trap those you’re playing with in a stream of bubbles to keep them from scoring.

There’s no online multiplayer support in Bubble Bobble Neo, and yes, that would have been nice. But the franchise has always been rooted in local multiplayer. I know I had one hell of a good time playing with friends on the same screen and fully expect you to as well!

Once you’ve exhausted the hundred levels, clobbered your friends in versus mode, and posted your highest score to the leaderboards, you might still want more. And if you do, you’re in luck. Taito released two additional maps as DLC for the game and each bring 50 more stages for a total of 100. Now, they’ll set you back 240 MS Points each, but you can’t put a price on nostalgic happiness can you?

Blast Factor: Bubble Bobble Neo is a quickly addictive XBLA title that will please followers of the franchise and entertain newcomers. Co-op and four-player modes are added benefits that will keep you playing for hours and hours. Updated graphics that pop and sizzle are great, but the core gameplay is what defines the title and everything feels great in that department.