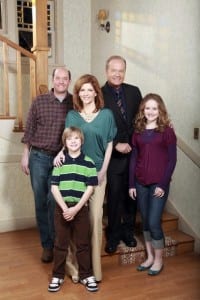 Tonight marks Kelsey Grammer’s hopefully triumphant return to primetime with the premiere of “Hank” on ABC at 8. “The Middle” follows at 8:30.

That’s it for the networks tonight, but TLC has two new ones: “I Didn’t Know I Was Pregnant,” at 8, followed by “King of the Crown” at 9.

MTV starts a new “The Real World/Road Rules Challenge” at 10 p.m., and BET has the premiere of “First In” also at 10.

In news, Kate Gosselin proves she’s at least as much a publicity whore as her ex, because she has signed on to continue exploiting her eight children on cable television. “Kate Plus Eight” will launch November 2 on TLC. We’re even hearing that Jon Gosselin will make appearances on the show.

We’re giving it 10 years before one of these kids is locked up for laying waste to a classroom.