The introduction of the Virtual Console has been a wonderful thing for gamers worldwide. Many lost classics are available to download, and oftentimes at a price that is very consumer friendly. Look no further than the prices on used copies of games like Super Mario RPG (find that in cartridge form for $60-70 in used shops) for evidence of that. We’ve also received some imports that gamers, myself included, are thankful for. Sin and Punishment is probably one of my favorite games, but I had never heard of it, never mind heard of it, before it released on the Virtual Console. Turbografx shooters I was never able to play growing up (I had a Super Nintendo and a Sega Genesis back then) get a lot of playtime on my Wii now, since I’m a big shmup fan. It has even benefited people who don’t own a Wii or don’t use the VC service, as the prices of used copies of the games released there have been devalued on places like Amazon or Half.com, saving you some cash on your retro gaming in old-school, cartridge form.

While the VC has been great and is loaded with more titles than most gamers know what to do with, it could always use more. When I heard that Zombies Ate My Neighbors was rated in Australia for potential release, I thought about what other titles I was looking forward to seeing on the service. Now, this is not a “Best games not on the Virtual Console” list. This is more of a “Marc wants to play these games, so put them on now, k thanks”. I’m going to focus on the Super Nintendo here, as it is easily my favorite classic system from my childhood. There’s a few obvious ones here, but maybe I have a few surprises for you as well. One thing: I’m not mentioning the Final Fantasy titles here, as Square Enix has already confirmed they are on the way. We have other things to bug Square about anyways, as you will see.

Today we’ll take a look at five of the 10, with the other portion coming tomorrow. 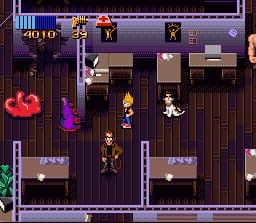 I know that tentacle from somewhere...

LucasArts developed a bunch of great SNES titles, and this was one of the non-Star Wars persuasion, and probably my favorite of the entire set. The Konami published title had you taking out zombies, monsters and ghouls with anything you could find, from squirt guns to alien weaponry, all in the name of saving your neighbors and other oblivious people from the hordes of the hungry. The game was hilarious for many reasons, like the giant babies that served as bosses on occasion, killing the powerful werewolves by throwing kitchen utensils at them (silverware! Ah ha!), the campy look and feel to everything–it had a very old-school sci-fi theme going on, with swirling red circles for hypnotic effect as well as cheesy, cliche enemy types–and the unintended consequences that arise from you and your pal playing co-op, fighting over the game’s limited resources, weapons and items that help you achieve the highest score.

The SNES has one drawback, if you’re one of those people that hates Mortal Kombat on the SNES anyways. There’s no blood, though everything has been replaced by goo. When you die, purple goo drips down the screen. It fits in with the 1950’s sci-fi, B-movie vibe, so it’s not a huge difference or anything. Don’t worry, we won’t say you aren’t hardcore if you admit you don’t mind the goo. As a bonus, you get a flamethrower in one of the levels that isn’t available in the Genesis version. Who doesn’t love flamethrowers?

While many of Virtual Console’s best titles have been single-player adventures, Zombies Ate My Neighbors was one of the best multiplayer experiences on the system, and it’s a shame it has not been released yet. LucasArts has been releasing a ton of their stuff on the service lately though, so maybe we’ll be able to open Pandora’s Box and hide from the chainsaw maniacs again soon.