Modern Warfare 2 and Monster Energy Drinks teamed up today and revealed a line of soft drinks headed to Kwik-E-Marts everywhere and detailed the prizes to be won for buying the mountains of sugar. 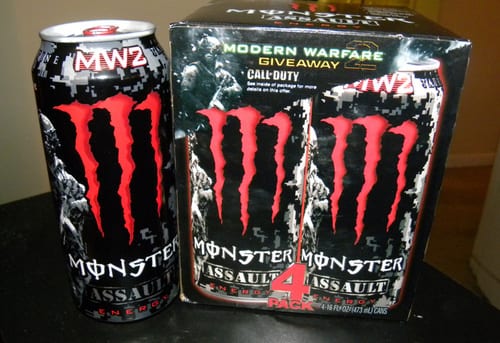 What’s being called the Monster Modern Warfare 2 Giveaway, will hand out 1,000 copies of the Modern Warfare 2 Hardened Edition; 5,000 map pack codes for a pack planned for a spring 2010 release; 10,000 Modern Warfare 2 premium themes for the Xbox 360 or PS3; and free cans of Monster Energy drinks.

Every pack of Monsters you buy comes with a code on the inside good for redemption at the promotion website, which isn’t live at the moment.

You’ll find the codes in specially marked 4-packs of Monster at retailers everywhere and 6-packs available only at Sam’s Club.

My project for the evening? Scour the area for the elusive soft drink!