This review originally appeared on Reviewcenter.com in 1999.

Force 21 is far from your normal real-time gtrategy game. You don’t have a base where you begin — mining resources, building buildings, which in turn allow you to build certain units. No, it’s nothing like that. Force 21 doesn’t try to be that. It’s something much better.

Force 21, set 15 years in the future, has you in the middle of a war. I know that you may be thinking, “Oh, no. Not another futuristic WWIII scenario” but this actually seems to be possible. China, thriving off of its economic boom in the 1990s, has become short on natural resources and raw materials. On the other hand, Russia, economy falling from the breakup of the USSR in the 1990’s, is almost on the brink of collapsing. China, taking advantage of this, invades the Republic of Kazakhstan, for much needed materials. 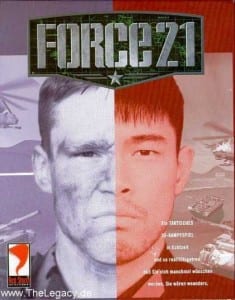 “NUKE “ËœEM” is what you’re probably thinking, but that won’t happen. Apparently, missile defenses have been researched so much, that nuclear weapons have become obsolete. The only practical way to fight is by conventional warfare. China, obviously having the advantage over the tumbling Russia, was predicted to barge their way through the Russian army no problem. But the United States of America, trying to get in the middle of it, sends some forces into the area, hoping that they may dissuade China from invading. China decides to attack anyway. That’s where the game begins.

You can either choose to be the invading Chinese army, or the defending US army. Either way you decide to go, you have complete control over 16 different platoons from each army. These platoons are made up of tanks, surveillance, recon, helicopters, artillery, APC’s and electronic warfare units. In some missions, calling for air support is also permitted.

Each side has 15 missions in the campaign, with a briefing before each one, showing you the objectives. Next, you look at what units you are going to bring into the fight. You are also given approximate locations of where the enemy is. As nice as this can be, don’t set up an entire attack based on it. Always scout ahead. The enemy is prone to move around the area.

After all that is done, you are now in the game. You will find your units sitting nice in pretty in front of you. If you have ever played a RTS before, then you already know the basic commands. The only frustrating part of the setup of the game is that you can’t just click on a tank, or any other unit, and order it to do something. If you want to move just one unit around, you must separate it into it’s own platoon. While this is not a big thing to do, just a drag and drop, it gets quite annoying when, in the heat of the battle, you need to move just one unit around. Unlike most RTS games, you just can’t see anything on the map by clicking there. Your point of view is what the commander of the platoon would see. An interesting twist in the game is that requires that you do more recon than in other games.

Now, the grits of the game. The sound is quite good, but the voices of the units get repetitive real fast. The sound detail and quality make you feel like your there, but to take advantage of it, you’ll need a good set of speakers. The graphics in this game are absolutely superb. The detail of each unit is incredibly realistic, which add to the total realism of the game. Explosions are well done, not cheesy looking like a lot of games do. One of my only complaints with the graphics of this game is the distance that you can view off into the horizon. There always seems to be a layer of fog, limiting your visibility range. Sloppy work there takes away from the playing experience. I mean, if you were sitting in a tank, on relatively flat land, I would think that you would be able to see a little further than a couple of hundred of feet. Other than that, kudos to Red Storm on the realism.

The replay value of the missions is not the best, as the missions are mostly the same time after time, the only difference is the exact location of the enemy units.

The single player experience may be the best part of the game. Due to the unpopularity of this game (caused by a bad release date) there is a very small multiplayer base to play against. This is too bad, because this is the kind of game that’s really fun to play with a group of friends. The fact that there is hardly anyone to play with is very odd, seeing as how both Mplayer and Microsoft Gaming Zone support play for the game.

Overall, Force 21 has enough to satisfy both the people who like to sit down and play a realistic war game and those who just want to blow shit up. The ease of play is what really makes this game work. Also, I found absolutely bugs in this game, which is becoming more and more rare these days with companies over hyping games, then throwing crap programming in a box just to get it out.

Turn to page 2 if you want to see how the game ends. We also have a cool game demo available for download.