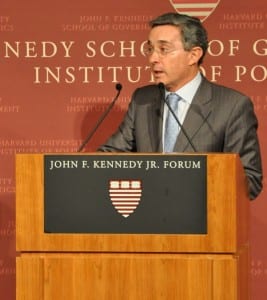 CAMBRIDGE — The voice of dissent echoed through the streets of Harvard Square Friday afternoon as protesters rallied in front of Harvard’s Kennedy School of Government. They chanted “fascist” and “paramilitary,” referring to Colombian President ƒlvaro Uribe Vƒ©lez, who was in town to speak at the school.

The president, a former Harvard Extension student, was invited by the university to host an open-ended forum with college students. The protesters represented those disquieted by the possibility of a referendum that would allow Uribe to run for a third term in 2010. Students at Harvard also presented the president with a letter encouraging the president to cede his position in the name of democracy, arguing that a third term would go against the fundamentals of the country’s constitution.

“We believe that such a decision will weaken the rule of law, as well as threatening the separation of powers of the Colombian state,” the students wrote in their letter.

While Uribe did not formally announce his intention to seek a third term, the actions of the legislature clearly suggest that he could follow the growing trend of Latin American leaders amending their Constitutions in order to extend their time in power.

Students tried from every angle to get him to disclose his intentions, but Uribe asserted that what he ultimately seeks is a competent leader for his people. “My own destiny does not depend on me, it depends on the constitutional court, on the people and on my God,” Uribe said. “Of course, I consider that it’s much better for my country to have many leaders committed with the general principles that we are fighting for, but, at the same time, … we have lived (through) many, many years of weak governments.”

Uribe also spoke of how his administration has improved the country on many fronts, including his record on human rights, health care, labor laws and public safety.

“This is the government that has recovered freedom in Colombia,” Uribe said. “During our administration, we have received over 51,000 terrorists members who have demobilized.”

He encouraged people to visit Colombia, ending the forum by saying that “the only risk of going to Colombia is wanting to stay.”