Wii-maker Nintendo today revealed a new Wii Sports Bundle. This one has an extra MotionPlus accessory included but will run you $10 more.

Beginning October 12 Sports Resorts enthusiasts can pick up a copy of the game and score not one, but two precision-based MotionPlus accessories. 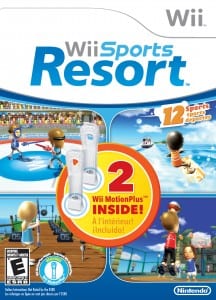 The new level of fidelity is pretty much completely awesome as your movements are now directly tracked in a very true 1:1 manner, and the few games that support the accessory are great successes. We played and reviewed Grand Slam Tennis, Wii Sports Resort, and Tiger Woods ’10, all of which make great use of the MotionPlus.

The MotionPlus sells for $19.99 (strangely $24.99 at GameStop) separately, so snagging the new bundle would seem to be worth it.

Oh this is the season of price cuts. First the Wii drops to $199 and now this? We love it.