PC gamers have had low-priced and free online, second-tier shooters for years now, so it’s not surprising to see such B-grade attempts hitting consoles. SouthPeak and developer TimeGate Studios’ Section 8 definitely fits the bill, except that it’s neither low-priced nor free. The game is basically a multiplayer-centric first person shooter that tries to throw a twist on the mainstays like Unreal Tournament and Halo 3 (or for older PC gamers, Starsiege Tribes).

The story has something to do with armored super soldiers who fight each other across a variety of huge, bland landscapes for very nearly indeterminate reasons. The soldiers look like a cross between Halo’s Master Chief and Warhammer 40k space marines… with less personality. In fact, the whole game manages to provide one of the most generic sci-fi universes you’re likely to see all year.

The single player campaign puts players in the shoes of one of the said generic, parachute jumping space marines, as he struggles against the evil forces of red. These levels task you with plowing through enemy soldiers with your fellow team, hacking computers, stealing data, shutting down planetary defense systems and other tried and true objectives of sci-fi action. The single player campaign actually uses the same maps as the multiplayer mode, though they unlock sections at a slower pace. In multiplayer, the whole area is open from the start.‚  This gives you an easy way to get used to the gameplay and the maps while burning through the otherwise short and throwaway story. 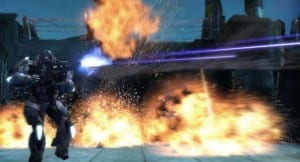 While the single player action is generally lackluster, the AI of both enemy and ally troops is truly awful. Don’t expect much help on the battlefield, but then again, there’s not much in the way of intelligent opposition either. If you do happen to die, you just respawn in the air again, which is one area of originality. At a certain altitude, you can apply air brakes that give you limited control over where you land. This makes it easier to get right back into the action or close to your current objective.

The multiplayer aspect of the game fares much better. The game has only one game mode, called Conquest, but the scope of the maps and support for 32 players makes for surprisingly hectic and charged battles. In Conquest, two teams earn points by not just killing your enemy, but capturing control points, and completing “dynamic combat missions”. There are six different, timed DCMs, and any given game can feel like a variety of play styles thanks to this design element. 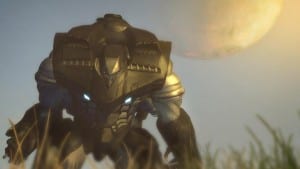 Section 8 has six different weapons and seven gadgets to play with. The guns are entirely standard fodder–a sniper rifle, shotgun, machine guns, rocket launcher, etc–and you can, as usual, only carry two at a time. You can also change load-outs at certain stations, but this is far from ideal in the heat of combat. The gadgets allow you to repair vehicles, heal teammates, become invisible to radar, use remote control mines, and knife people.

Earning money by completing objectives enables you to purchase vehicles and turrets in Section 8. The turrets are a nice idea, and give the game a vague RTS nod since the stationary guns help defend a specific area. The vehicles, on the other, are amazingly bad. There is a tank and a mech up for grabs with enough cash, and both are executed so poorly that you’re better off avoiding them. On foot, your normal pace is sluggish, but your armor allows for super-powered sprints and rocket pack high jumps. At full speed, you can plow through an enemy killing them instantly, and the ability to jump several stories in the air makes navigating the huge maps a little easier.

Blast Factor: In every sense, Section 8 is a mediocre shooter, and had it been released at a budget price, this might have been just fine. PC gamers are used to plenty of cheap alternatives to big name releases, so why not consoles? Unfortunately, this isn’t a budget-priced game–though it’s almost a certainty that it soon will be. The single-player game is utterly forgettable, yet the multiplayer portion holds enough interesting concepts to make it worth a look once it hits the bargain bins.