BURBANK, Calif. — Easily one of the most anticipated shows of the season, ABC’s “FlashForward” promises not only thrills but an ensemble cast sheet that reads like a roster for some big budget Hollywood film.

The plot surrounds 2 minutes and 17 seconds, when people all over the world inexplicably experience a power blackout at once. As if things were not eerie enough, survivors of the event discover they have caught glimpses into their own futures, a flashforward. With such such a dramatic and mysterious start, it’s easy for someone to label it offhandedly as a sci-fi series, when in fact the only really surreal element is the blackout itself. After previewing the pilot earlier this summer, it became clear that the driving force will be how individual people take charge in shaping the future. Will some of them fulfill their futuristic visions? Or will some change it?

After the debut of the series, there is no doubt that most viewers will be asking the same questions.

After a series of set visits, our meet up with the cast of “FlashForward” took a different spin. Upon arrival we immediately crossed the threshold of what is the interior of the federal building. The set is impeccable and very see-through, as glass windows encircle the room leaving little room for hiding out.

We sat in a tucked away office on set with Courtney B. Vance (Stan Wedeck) and Christine Woods (Janis Hawk). Both actors said they were excited about the new series.

The cast also includes Dominic Monaghan (“Lost,” “The Lord of the Rings”), John Cho (Harold from the “Harold and Kumar” movies), Sonya Walger (“Lost”), Genevieve Cortese (“Wildfire”) and Jack Davenport (“Swingtown,” the “Pirates of the Caribbean” movies). The series is produced by Marc Guggenheim, David Goyer, and Brannon Braga.

We wondered how each character’s “flash” would play out. 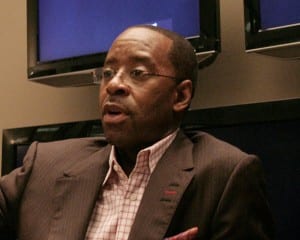 “One of the things that are so interesting about David (Goyer) and his compadres, for lack of a better word, is that they set it up where I think they can go anywhere,” said Vance. “A lot of time we don’t even know. There are some instances where maybe some people are lying about their flash forwards or telling half the story.”

And while both actors may not always know what to expect for their characters, they conveyed to us their thoughts about it.

“Well, you can’t prepare for what you don’t know, really.” Vance said.

“For me, I kind of like not knowing because in that way you can be in the moment. To not have these (expectations)” said Woods.

When we asked further about working with an ensemble, and whether characters’ storylines overlap at some point, it was interesting to find that for their roles, they’re spread out a bit more.

“Are you in this episode?” Vance turned to ask his co-star.

“Yeah, see I’m in episode seven and eight. I was crazy in episode five, and a little in six.

So I relish the idea that there will be some times when we’ll be absolutely crazy. And since we’re doing two or three at a time (episodes), it’s especially crazy on all of us.” Vance concluded.

“And I think because it’s two episodes (filming) at once, I think it’s a lot easier for them to keep secrets from us,” Woods said. “Because it’s such a puzzle, the way that they shoot the series with so many people, you look at the schedule and it’s confusing. Even if you’ve read the script.”

Vance added, “On top of the fact we may be shooting one, and reshooting another one. So continuity wise, it’s hard trying to get a sense. On Thursday we were shooting four and five, then reshooting five and six. So it’s just crazy.” 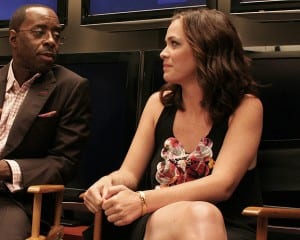 “And much like the show, everything goes back and forth” Woods said, nodding in agreement.

For the cast of “FlashForward” it’s easy to see the friendly vibes among them are mutual, where big egos don’t seem prevalent. As a veteran on stage, and recently part of “Law and Order: Criminal Intent” we asked how Vance felt taking up the role of FBI handler Stan Wedeck, another character in law enforcement.

“For me it’s different because in ‘Law and Order’ there was no characterization. You’re just the facts man. This is refreshing because we’re all (together), and we’re all involved,” Vance said.

“And we are all so personal,” Woods said. “We take it to the personal side of things because it is really a mystery show, an investigative show. These people are what essentially make it.”

While the hype is still out there about the series and fans anticipate its premiere, Blast says the show is much more than a sci-fi series. FlashForward is more about the human elements that make you care about those characters onscreen.

This is the first of our two part feature covering “Flash Forward”. Coming up, more details about the series after the pilot from the series producers, plus more with Courtney B. Vance and Kristine Woods and our interview with Joseph Fiennes.