When your imagination is the game, just how much fun can you have?

Scribblenauts, the hotly anticipated Nintendo DS project from 5th Cell, is a wildly ambitious digital endeavor. The idea is simple yet extremely deep; “Write Anything, Solve Everything.” ‚ And for the most part, it works, and it’s damn fun.

Filled with hundreds of puzzles, a cute art style and addicting and unique game-play, does Scribblenauts live up to the massive hype it’s up against, or will it be known as a simple gimmicky toy?

In Scribblenauts you play as Maxwell, an innocent and cute young lad and are tasked with solving puzzles by helping friends, defeating bad guys, and putting your mind to the test to do so. The game provides no back-story for who you are (besides your name), how you got there, or where you’re going, but none of this matters.

Puzzles in Scribblenauts are broken into two sections; “Action Mode” and “Puzzle Mode.” In both types you’re tasked with collecting Starites, the game’s reward for completing a level.‚  In Puzzle Mode you’re thrust into what 5th cell calls a “real-world circumstance” and are granted a hint, something like “Feed Me” at which point writing the name any foodstuff (apple, pretzel, corn dog, etc) and giving it to the hungry man will make a Starite appear and end the level. In Action Mode, my favorite, you’re only shown where the Starite is, and are not guided towards its retrieval. Both are exciting in their own respective rights and balance each other out very well, especially when you grow tired of one or the other. 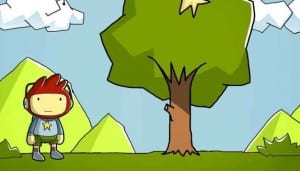 Completing each level earns you Merits which in turn yield “ËœOllars, the game’s currency, spendable in the aptly named “ËœOllar store on extra songs and avatars if you so desire. Merits are rewards that relate to the manner in which you solved a particular puzzle. If you don’t use a weapon, or repeat a word you’ll earn these task-specific rewards, and when playing to earn the most possible Ollars, you’ll really have to stretch your imagination.

Scribblenauts is all about solving these puzzles in your own way. The unprecedented level of freedom is staggering. If a Polar Bear is guarding a cave you must enter, you’ve got limitless options in getting through. I shot him in the face multiple times with a shotgun, but I could have just as easily lured him away with a hunk of meat, or any of the seemingly infinite other ways. 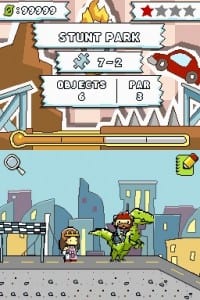 Beyond solving puzzles, Scribblenauts has a basic level editor allowing creative types the ability to create a fantastical world fit for such an imaginative game. You can place objects, assign actions to them, and place the Starite wherever the hell you want. Best of all, the levels you dream up can be shared with fellow creators via the Wi-Fi connection. The level editor is a nifty little tool to play around with, but you likely won’t spend much time here. 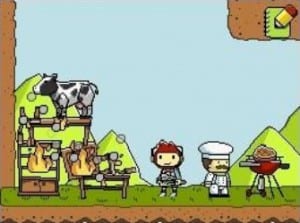 Where Scribblenauts suffers, and suffers hard, is in the control department. The game makes effective use of both screens, and I liked this, but controlling Maxwell is a painful endeavor. The directional pad on the DS controls the camera while the stylus exclusively guides Maxwell in a real-time-strategy, point and move manner.‚  Basically you point at that tree over there and he runs to it. This design choice is apparent but not yet frustrating in early levels, but in the game’s mid to latter stages, when you attempt to traverse more hazardous environments, accidental deaths will run rampant, likely causing you to put the game down hopefully ‚ before you get really mad. 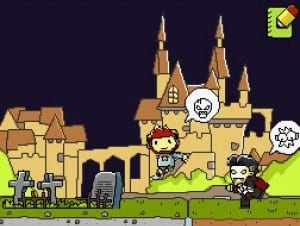 The controls don’t ruin the experience by any stretch of the imagination. You’ll adapt and you’ll die less after you grow accustom to the design choices, but I just wish 5th Cell allowed us to tweak these to allow for directional pad control. Maybe in the sequel?

What 5th Cell accomplished in Scribblenauts is mind-blowing and wholly impressive. With thousands upon thousands of objects, items, and people available to mess around with you’ll likely spend hours on the main screen doing nothing but creating. Ever want to know if God riding a skateboard wielding a shotgun could take down the mighty Kraken? In Scribblenauts, such a scene is possible, and this novelty alone is worth the price to play.

Blast Factor: Scribblenauts is a wildly imaginative, unique, and cute adventure game, but it’s not without faults. Controlling Maxwell can be painful at times, and this simply cannot be ignored. Beyond its detriments though is pure, child-like fun that will undoubtedly keep you coming back for more and more.

Played through approximately 130 of the 200 puzzles. Toyed with the level editor; tried all it’s features. Wrote hundreds upon hundreds of words so as to test the game’s catalogue. Pit God versus a shotgun-wielding Death. Results were hilarious.

Scribblenauts is available exclusively on the Nintendo DS and DSi systems, and retails for $29.99