SAN JUAN — Aquamarine seas, palm trees and sunshine; it doesn’t really get any better, in my book, at least. There’s something intoxicating about the tropics, like the way a banana becomes part of a savory meal, the way the salt air and humidity make a beer taste that much better, the way a straw makes drinking out of a coconut seem civilized. Puerto Rico did not disappoint on those fronts. 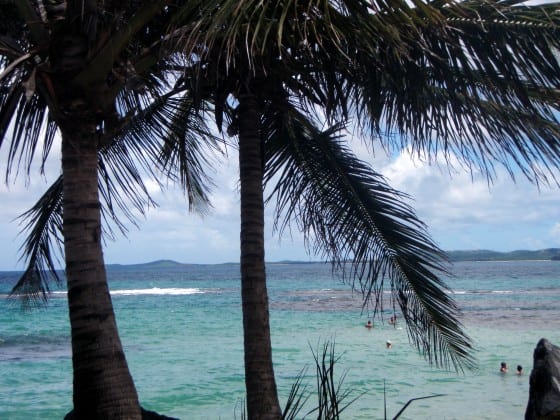 We did a lot some days and a whole lot of nothing on others. Still, I left feeling that I must return to Puerto Rico. I have a feeling there’s a lot that I still need to see.

A few thoughts: While Old San Juan is charming, I got the distinct feeling that the city in general is trying mighty hard to become South Beach. Places push their prices sky high, blare house music, drape everything in white and compare themselves to The Delano. To fall into this would be a shame. While I love South Beach, Puerto Rico is no South Beach and I wish they’d try to forge their own identity rather than become copycats. The result ends up looking like a fake Louis Vitton bag: kind of desperate and cheap.

I’m also at a loss when it comes to the service in Puerto Rico. Whether at a restaurant serving comida tipica or an upscale place with menus in English, the waiters were the same: they’d come and take your order, bring your food and then disappear. Getting a check or paying a bill were nearly impossible and probably doubled the amount of time I would have spent in any establishment. This wouldn’t have been nearly as bad if I’d had some kind of drink in front of me, but sitting at an empty table, with an empty glass, trying to flag down a waiter is simply no fun. It also makes the dine and dash a tempting prospect”

Notables: Eating well in Puerto Rico is easy. Eating healthily, not so much. It seems the Puerto Ricans like to fry everything- fish, tacos, plantains. You name it, you can probably find it fried. Even seemingly good foods like rice and beans are cooked in ways to increase their calorie content- a technique that harks back to the days when people had to subsist on the basics. Rice is typically cooked with lard, while beans come stewed with some kind of pork fat.

We ended up at a strip of food stalls in Loquillo one day, about an hour east of San Juan, but I was so hungry I forgot to take pictures. There must have been 50 places, all lined up on the beach, all selling chicharron, mofongo, fried fish and yellow rice. While the comida tipica was tasty, I can’t figure out how these places survive when they seem to all sell the same thing. 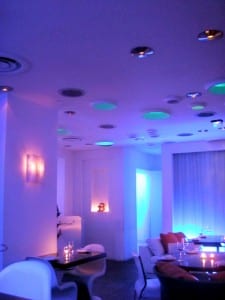 The Surprise: San Juan Water & Beach Club in Isla Verde. Yes, this place falls into the category of establishments trying too hard to be South Beach. But the lovely ocean views, waterfalls in the elevator and not too pretentious service made it work: this place is chic, fun and definitely worth a visit. We started our evening at Wet, the rooftop bar which afforded a lovely 360-degree view and a too-cool-for-school atmosphere. This would be a great place to come on a date, or to start a rowdy evening with friends. (One complaint: they don’t have a cocktail menu. What upscale nightlife establishment doesn’t have its own cocktail menu?)

We then had dinner at Tangerine, the restaurant downstairs that emphasized ambiance with blue lights, a waterfall behind the bar and white everything. While appearance is good, what sets this place apart is the fact that the food was tasty and original.

We started with a trio of ceviches: ginger tuna, topped with candied ginger; coconut snapper; and tangerine salmon. Each was distinct and unlike any ceviche I’ve ever had: the snapper was subtly sweet, the tuna had a bit of bite and the salmon emphasized sour.

Next, we had a paella with red snapper. It was a lovely execution, not at all greasy, which can be the case with paella. The rice was accented generously with carrot, zucchini and red pepper, as well as large, gorgeous chunks of snapper.

The highlight of the evening, however, was the steak with green chile sauce. To be frank, I didn’t have high hopes for this one, but we didn’t think two tapas-sized dishes would be enough to eat (though in the end, two would have been fine). Chunks of tender beef sauteed in a red-wine, chile and caper sauce, and served with house fried plantain chips, this dish was succulent, savory and impossible not to love. While our previous two dishes had been good, this one set the bar even higher.

The Regret: Driving back to San Juan from Loquillo on Saturday I passed a sign for chicharron de conejo. I was intrigued. Chicharron are typically fried pieces of pork skin and conejo is rabbit”¦ fried rabbit skin? Alas, I kept driving, and now I haven’t been able to stop wondering what I missed out on. 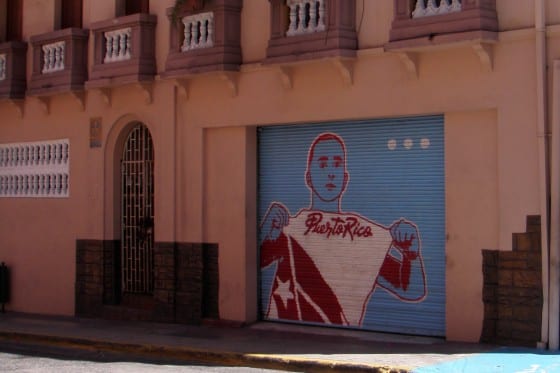 While I mostly have great things to say about Puerto Rico, there was one place that annoyed me so much, I feel compelled to warn others to stay away, especially because it’s supposed to be one of the best places on the island.

The Disappointment: Budatai in Condado. Frommer’s led me astray with this one, naming it one of the 10-Best Dining Bets in Puerto Rico. Perhaps the good people at Frommer’s only ate at 10 places in Puerto Rico? Executive Chef/Owner Roberto Treviƒ±o is a contestant on Iron Chef America this season, and if this cuisine is any indication of Treviƒ±o’s talents I’d avoid putting any money on him winning.

Located across from La Ventana al Mar Park, the terrace area where we ate did have lovely views of the sea and surrounding area. However, that did little to make up for the limited menu or poor execution. My first beef with Budatai came with the menu, which boasted “Wild Salmon” but which our server then informed us was actually farm-raised. My sense of distrust raised immediately. Why would you put “wild” on the menu if it isn’t? What other fabrications are included? Is the vegetarian cuisine truly vegetarian? Is the duck really duck?

We started with some vegetarian egg rolls, which interestingly enough had cheese in them. Yes, cheese, which in my book is the ultimate faux-pas when it comes to Asian-fusion cooking. Worse, the cheese was gooey and tasteless, adding nothing but calories and a strange mouth feel.

My companion, who keeps kosher and hence had little to choose from on the shell-fish and pork heavy menu, reluctantly opted for the salmon, which came with vegetables and a Bearnaise sauce- again, a strange offering at what is supposedly an Asian restaurant. It was forgettable at best. I opted for the pork dumplings (billed as the house specialty) and a side of duck fried rice.

In his last column as The New York Times’ dining critic, Frank Bruni suggested that one way to safely navigate a restaurant’s menu was to “scratch off anything that mentions truffle oil.” I wish I’d listened. As a rule, pork dumplings are usually a safe standby in Asian places. Budatai’s started off promisingly enough with some well-flavored pork wrapped inside a doughy wrapper. Then things got a bit”¦ well, crazy. The dumplings looked like they’d been grilled, but they were about as crispy as chewing gum. Then, they were topped with what looked like any and everything the chef had within reach: some strange brown sauce, caviar, truffles, truffle oil, garlic, sesame seeds, watercress”¦ and those are just the things I could identify in the terrace’s half-light. It was a cacophony of flavors, so busy I wondered if I’d even notice if half the ingredients were missing.

The duck fried rice was similarly busy. Greasy, with only a trace of duck, this dish came laden with sweet plantains, which were just weird. Just say it: rice, banana and duck”¦ it even sounds weird, doesn’t it? This dish would have been saved with more duck and perhaps the inclusion of some complimentary ingredients: think scallion or bean sprout. Banana? Not so much. 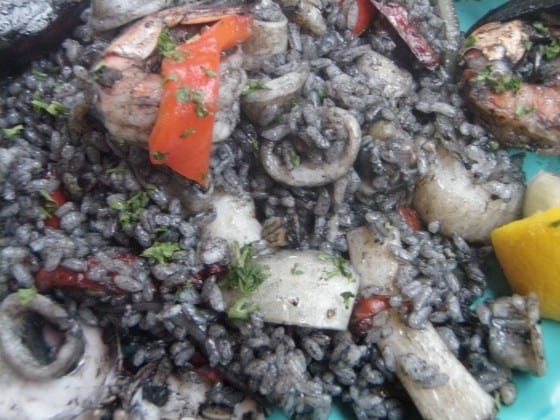 The Delight: Mirƒ³, also in Condado. This place obviously caters to tourists, but had a few hard to find dishes, like grilled baby octopus and arroz negro — rice cooked with squid ink and then mixed with a variety of shellfish. In addition, the sangria was pretty amazing. Made to order with red wine, brandy, triple sec, pineapple juice and a squirt of sprite, it was refreshing, but not too sweet.