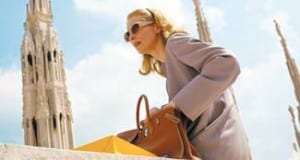 Magnolia Pictures announced Tuesday that it has acquired the North American rights to Luca Guadagnino’s “I Am Love,” staring Tilda Swinton, which recently showed in Venice and Toronto.

“A sumptuous, ambitious and complex drama, ‘I Am Love’ features a masterful performance from Swinton, who speaks Italian and Russian in the film,” Magnolia said in a statement. “Compared by critics to Visconte’s ‘The Leopard’ in its skillful dissection of the cultivated lives of an aristocratic Italian family, ‘I Am Love’ was born out of a longtime friendship between Guadagnino and Swinton, who previously collaborated on 1999’s ‘The Protagonists’ and began discussing the project over seven years ago.”

“I Am Love” tells the story of the wealthy Recchi family of Milan, whose lives are rapidly changing. The family patriarch has surprised the family by willing shared ownership of his massive industrial company to both his son Tancredi (Delbono), and his grandson Edoardo Jr. (Parenti). Meanwhile, Edoardo Jr. has other plans, dreaming of opening a restaurant with a talented chef friend, Antonio (Gabbriellini). At the heart of the family is Tancredi’s wife and Edoardo Jr.’s mother, Emma (Swinton), a Russian immigrant who has adopted the culture of Milan, and whose existence is shaken when she enters a passionate love affair with her son’s friend Antonio.

“With ‘I Am Love,’ Luca Guadagnino has given us one of the most exquisitely crafted, beautifully mounted films of recent memory” said Magnolia president Eamonn Bowles. “It is a completely unified, cinematic masterwork, and mere superlatives don’t do justice to the infinite marvels of Tilda Swinton.”

There’s no word on an American release date.