Electronic Arts today announced that the Dutch Nation Football (soccer) team will appear in FIFA ’10 as they do in real life.

According to today’s press release, EA and the Royal Netherlands Football Association reached an amiable accord to bring all Dutch footballers to digital form in FIFA ’10, EA’s latest football simulator. 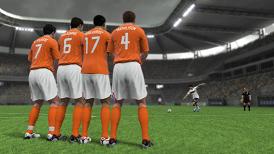 The Dutch team was playable in past FIFAs but players’ likenesses were fake and their kits (jerseys) were ficticious. No more! says EA, as the agreement, based on what, we don’t know, brings the entire Dutch team, including standouts Wesley Sneijder, Robin van Persie, Arjen Robben, Klaas-Jan Huntelaar and Mark van Bommel, and their respective kits to life in FIFA ’10.