The Holiday 2009 lineup of games lost a pound today, as Activision and Bizzare Creations’ “Blur” has been dropped to 2010. 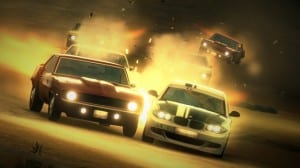 The reason? No, the development team didn’t get the pork flu, rather multiplayer is to blame.

In today’s press release, Activision cited “more time to enhance the game’s innovative and distinctive online multiplayer gameplay” as the reason for delay.

“We are committed to making Blur a great new racing franchise, and we are very encouraged by the game’s design,” stated Mike Griffith, President and CEO, Activision Publishing. “The additional time will allow the studio to fully optimize the vision they set out to create for Blur including a distinctive and groundbreaking multiplayer mode that will appeal to a broad audience.”

We don’t‚  mind this news, as long as the final product is where it should be. However, 2010 contains a full 12 months and Activision didn’t specify what half, quarter, month or day the game is to be available, so we could be in for the long haul.