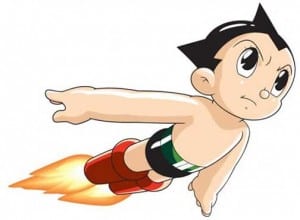 Japan gets the first premiere on October 5, since that’s where Tezuka Osamu created the character more than 50 years ago. The film’s director, David Bowers, producer Maryann Garger, and Japanese voice talents including Aya Ueto and Koji Yakusho, are expected to attend the world premiere.

The film’s production base, Hong Kong, will host its own premiere on October 17 with the film’s Cantonese voice talent.

The US premiere is October 19 in Los Angeles, which will include English voice talents including Freddie Highmore, Kristen Bell and Nicolas Cage.

Astro Boy will be the first Hong Kong produced movie to be released across 4 continents and 20 markets in the same month, Imagi said.