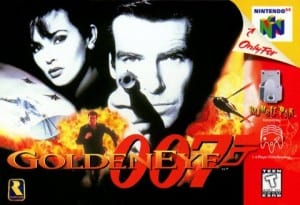 Praised today as the title that brought 4-player split-screen multiplayer mayhem to the forefront of the first-person-shooter genre, and arguably one of the best video games based on a film to date, this title will forever rest in the shadows according to Rare.

When addressing a reader question concerning Goldeneye’s return on Nintendo’s Virtual Console or the Xbox Live Arcade, Rare answered with a resounding “nope.”

“That was some time ago, my friend. Fate was against us that day. Destiny conspired to raise the hurdles even as we attempted to clear them, resulting in unpleasant groinal injury. I suspect we’re long past the stage where an agreement was on the cards, but you never know. Stranger things have happened”¦ somewhere “¦ probably.”

Sounds to us like past and present Bond license holders Nintendo, Microsoft, and Activision can’t agree on this one, and that’s a shame. Well, the door isn’t completely shut. But it looks like this is as close, and as awesome, as we’re going to get for now.