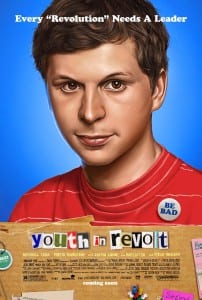 The Weinstein Company announced Thursday that it has changed the release date for “Youth in Revolt” from October 30 to January 15, 2010.

“Youth” is a coming-of-age comedy starring Michael Cera (Juno, Superbad) and based on the novel by C.D. Payne. It’s the story of Nick Twisp, a unique, but affable teen with a taste for the finer things in life like Sinatra and Fellini, who falls hopelessly in love with the beautiful, free-spirited Sheeni Saunders (Portia Doubleday) while on a family vacation. But family, geography and jealous ex-lovers conspire to keep these two apart. With Sheeni’s encouragement, Nick abandons his dull, predictable life and develops a rebellious alter ego: Francois. With his ascot, his moustache and his cigarette, Francois will stop at nothing to be with Sheeni, and leads Nick Twisp on a path of destruction with unpredictable and uproarious consequences.

So be patient, kids. Let’s not start a revolution.