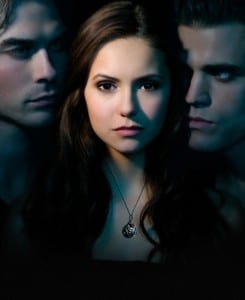 This summer Blast brought you coverage of “The Vampire Diaries“ straight from Comic-Con International in San Diego. The supernatural love story between a vampire and a human girl was showcased at the convention not just once but twice with a viewing during the popular Preview Night, and later in its regularly scheduled panel.

No, we’re not talking about “Twilight” … this time.

Since then the buzz over the new “Vampire Diaries” series has exploded into a bit of a phenomenon, drawing comparisons to the mega-popular “Twilight” craze. Despite the similarities, “The Vampire Diaries” is not just a brooding love story as much as it is also a thriller at times — an element which adds to its appeal.

After months of anticipation fueled by countless online promotions and on billboards strewn everywhere, the series made its debut last week with incredible results. “The Vampire Diaries” surprised nearly everyone when its ratings resulted in a staggering 4.8+ million viewers on Thursday night, making it the highest rated series premiere ever for TheCW. With the talents of a production team consisting of Leslie Morgenstein (“Gossip Girl”), Bob Levy (“Gossip Girl”), Kevin Williamson (“Scream” “Dawson’s Creek”) and Julie Plec (“Kyle XY”) the series proved itself golden on its first night.

And so it seems vampires and love stories won’t be unpopular any time soon. But to the show’s merit, it holds promise on going beyond a simple trend. This is clear when we see how the show treats the family relationships between the human characters. As long as “The Vampire Diaries” continues to focus on the relationships of its characters in a way viewers can relate, it will undoubtedly prove its staying power.

Tonight continues with another new episode, “Night of the Comet”, which deals with the aftermath of Damon Salvatore’s arrival — nicely portrayed by Ian Somerhalder — and the havoc he may cause in Mystic Falls.

Catch “The Vampire Diaries” every Thursday at 8 p.m. on The CW.