Google announced in a conference hosted by TechCrunch on Monday that they have released a new document reading format for online use. Referred to as Fast Flip, this site is meant to mimic the feeling, process, and texture of reading a real book. Google, of course, thinks this will lead to more advertising revenue for publishers and themselves.

Fast Flip is indeed a fast way to scan across the many websites who have signed on. Instead of loading every website you might want to read, Flat Flip displays screenshots of the websites’ stories, organized by category, topic, and headline. 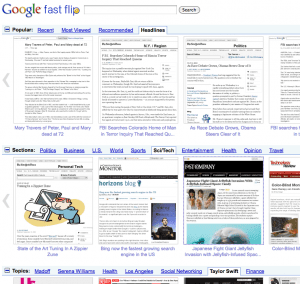 The homepage at Google's Fast Flip.

The stories are displayed on electronic pages that can be flipped through similar to a PDF file. About 30-40 publishers, web outlets and broadcasters have signed on to support this new format right now. The groups include such giants as Newsweek, Businessweek, the New York Times and the Washington Post.

This is part of Google’s Dedication to publishers, which includes funneling more profits towards publishers and helping newspaper companies to develop a model by which they can charge for access to premium website content. Google hopes Fast Flip will become popular by making online reading easier and more enjoyable, leading to showing more advertisements to more people and ideally give most of the ad revenue to publishers. It would only make sense that Newspapers would want fast flip to be successful”"but not too successful. The newspaper executives still need people to actually go to their sites where they can charge for ads without having to share with Google. 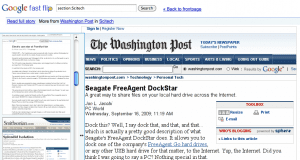 Clicking on an article embiggens that article. A sidebar allows you to navigate to other related stories.

This seems like a great partnership, further expanding Google’s reach and influence while preserving one of the oldest and most fundamental arts of American culture. That being said, it also sounds like Google might be attempting to reinvent the web’s wheel, the PDF. As with most Internet start-ups, only time will tell.