Bethesda today released an update for the PlayStation 3 version of Fallout 3 that includes game optimizations, and most importantly trophy support for inbound downloadable content.

“Broken Steel,” will hit the PlayStation Network next Thursday, September 24, followed by “Operation Anchorage” and “The Pitt” October 1, and then “Point Lookout” and “Mothership Zeta” a week later on October 8.

If Bethesda follows through on that ambitious promise that means PlayStation 3 Fallout fans, in less than a month, will have every last piece of FO3 digital wares at their disposal, and that’s got to be a good thing, considering how long a wait it’s been.

So if you’re on board to play Fallout 3 in its complete entirety, I’d wait till October 13 and save some scratch. 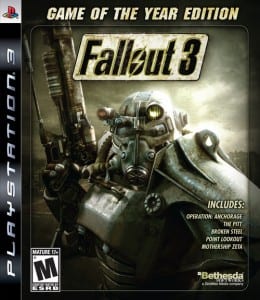