Nintendo’s Wii Fit might just be the best thing for the company this year. It sold millions and millions, promotes health-conscious activity, has a sequel on the horizon, and now helps Major League Baseball players?

A report in the Wall Street Journal today calls on‚  Heath Bell of the San Diego Padres as the man who saw his in-game avatar be judged obese and then did something about it. 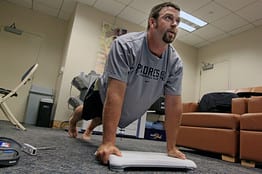 In trimming his mini-me down, Bell lost 25 real-pounds and credits the game with increasing his general balance. Additionally, Bell is more than enjoying his best year in MLB to date with 37 saves placing among league leaders. [Editor’s Note: I pick nits because of my baseball background, but this is his second-best season. Saves are not a credible measurement of value. However, Bell’s succeeding at a high level after his peak, so kudos to Bell and his weight loss on that note. -Marc]

Head on over to the Wall Street Journal Online for the full story.