Beyonce was the big winner at last night’s MTV Video Music Awards, taking home the big prize of Video of the Year for “Single Ladies”. It seemed to be lady’s night at MTV because Lady Gaga took home the honors for “Best New Artist” while Britney Spears took “Best Pop Video”. Green Day beat out Kings of Leon and Fall Out Boy for Best Rock Video, but the awards were ironically a very insignificant part of last night’s show.

Just in case you have been in a coma for the past 24 hours, the first thing you need to know about last night’s awards is that Kanye West should no longer be allowed on the premises. By Blast calculations, this is the third year that Kanye has publicly displayed his outrage at the MTV selection for an award. This year’s victim was America’s country sweetheart Taylor Swift, who won the first award of the night “Best Female Video.” In outrage that Beyonce didn’t win for “one of the best videos of all time” Kanye rushed the stage, took Taylor’s microphone during her acceptance speech, and proclaimed Beyonce should have been the winner leaving Miss Swift in horrified silence. Twitter explosions and blog frenzies after report that Swift was to be seen sobbing backstage after the debacle. 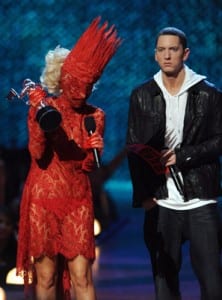 Outside of the dramatics, the VMAs this year contained a lot of W-t-fness, and that isn’t necessarily a bad thing. Every cut to Lady Gaga gave viewers a peak at outrageous outfit after outrageous outfit. Apparently being able to see was not a major concern when making fashion decisions. Equally as twisted was her live performance. Gaga performed her latest mega hit “Paparazzi” on the VMA stage. She lived up to her reputation of a fantastic live performance, but the crowd and viewers alike were a little disturbed by Gaga’s literal perception of the paparazzi killing her when she poured blood over her and then pseudo hung herself from the VMA ceiling. 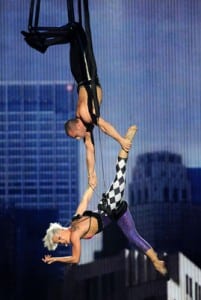 R&B badass Pink also used a harness for her VMA performance, which may have been the most impressive of the night. Pink performed the entire sang, hanging about 50 feet off the ground, flipping around and somersaulting with her trapeze partner. The most amazing part of the stunt was that she was continuing to sing live “" no lip syncing “" as she continuously flipped head over heels.

In fact there wasn’t a bad musical performance the entire night. Taylor Swift was impressive with her take over of the 42nd street subway station and subsequent Times Square performance. Beyonce amazed audiences not only with her fancy leg work but the fact that she didn’t have a wardrobe malfunction visa Janet Jackson at the Superbowl. Jay-Z and Alicia Keys topped off the night with their new duet, but it was the opening of the show that stole most of the attention. 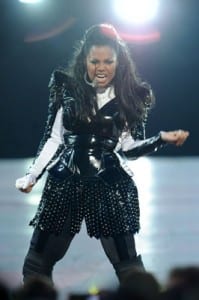 This year’s VMAs kicked off with a Janet Jackson led tribute to her late brother, King of Pop, Michael Jackson. It was touching and very fitting that this year’s awards were dedicated to a man who took music videos to a new height. Dancers recreated moves from the iconic “Thriller” before Janet arose on stage and re-created the moves from “Scream” while Michael’s mirroring performance played on the screen behind. Intermittently throughout the show, props were given to Michael as well as a full trailer of “This Is It”, the film compiled of all the rehearsal footage before his death, which will appear in theatres nationwide on October 28.

Performances really took precedence at the awards. Only five trophies were given out during the actual aired show. Equally as insignificant was host Russell Brand. While admittedly hilarious in his own right, British stand-up comic Brand fell flat as returning host of the awards. While MTV was probably banking on Brand’s gained notoriety over the past year, his brash humor didn’t translate well to the stage. It seemed that producers spent more time cutting to commercial after Brand’s crude punchlines than letting him speak, and that’s when he was brought on stage to introduce anyone at all. Though Brand has conquered television hosting, movies and even the New York Time’s bestseller’s list with his autobiography “My Booky Wook”, hosting just may not be his thing.

Overall, the show was surprisingly entertaining, especially considering the disappointing past couple of years. There wasn’t a boring moment during the entire two and a half hour runtime. Last night’s show was so well put together that it might have actually succeeded in distracting people from the fact that the ceremony is completely irrelevant. Seriously, when was the last time MTV even played a video?